Cristiano stuck in Barcelona triangle. Remember that time that Cristiano Ronaldo got trapped in a Barcelona passing triangle. Ronaldo got really angry, too. It seemed he was more angry at this Real Madrid teammates for not helping him win the soccer ball and chase down the Barcelona players. Ronaldo was trying to press but nobody was helping him.

Really, Ronaldo shouldn’t be too mad, players of all levels have gotten trapped in those Barcelona passing triangles. Legend says there are still players chasing after the ball in a Barcelona rondo drill. Eventually Ronaldo gives up and waves his hand in anger at this teammates, puts his head down and starts to walk back behind the half way line. I wonder if Pique started laughing at Cristiano as he passed the ball around him?

You might have to click over to YouTube to watch the video below due to La Liga copyright rules. It’s worth taking a look at, especially if you’re a Barcelona fan. I believe this game was the Champions League semi-final at the Bernabeu which Barcelona won 2-0. An el clasico for Ronaldo and Real Madrid to forget about, certainly.

Here’s more video of Cristiano Ronaldo getting owned by Barcelona. Ronaldo is highlighted in red in this video as he chases after the ball and Barcelona players. 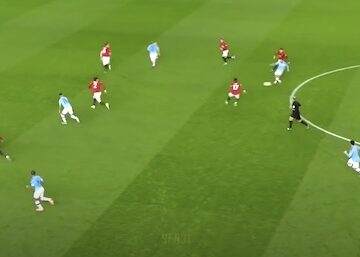 Posted by admin - June 26, 2019 0
Passing patterns continued. Master the art of keeping the ball. Now that we’ve discussed the importance of running through game-like…