What’s equally impressive about the halftime speech is it’s for the most part not in English, Jesse Marsch’s own language. I guess in other countries, other than the United States, say all across Europe, speaking another language isn’t all that unique, it’s rather just a part of daily life. But Jesse Marsch is a relatively new coach in Europe, so giving this energetic speech not is first language can’t be easy. And it worked, as Red Bull Salzburg came back and could have won the game.

“Be more ruthless against Van Dijk, we play with too much respect. Too much respect,” Marsch says in the locker room at halftime in both German and English.

“Are they strong? Yes. But it doesn’t mean that we should be nice to them and don’t tackle them or fight.”

“How many fouls have we committed? Maybe 2? It’s not a f–king friendly, it’s a Champions League match.”

WARNING: The video does contain some strong language but it’s for a good cause. They were down 3-0!

Here are the highlights. All the action from a Champions League thriller as Liverpool squandered a three-goal lead but recovered to beat Red Bull Salzburg 4-3 in the Champions League.

After the game Jesse Marsch said this:

“We have seen we can play at this level, when we play our football, we always have a chance,” Marsch said. “I am very proud of the team and it is important that we learn from this evening.”

RB Salzburg manager Jesse Marsch discusses his viral halftime speech that motivated his team to score three goals against Liverpool in the second half.

De Zeeuw Kicked in the Face

Posted by admin - June 26, 2019 0
De Zeeuw Kicked in the Face The Dutch midfielder Demy De Zeeuw, who came on for the suspended Nigel De… 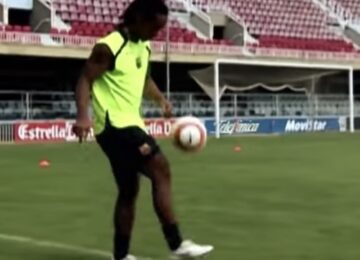 Posted by admin - June 26, 2019 0
Yes, this is the Ronaldinho crossbar commercial. The one and only Nike Soccer, or Football if you prefer, commercial. Are…

Posted by admin - June 26, 2019 0
Soccer players gaining weight: There used to be a day in the history of football when having a few extra…