Soccer / football is a passionate game. Sometimes it gets a bit rough. Most often those crazy moments happen when the goalkeeper is rushing out to win the ball. Keepers aren’t used to encounter an attacking player and are prone to misjudging the play – to say the least.

Here’s video of some WWE (World Wrestling Entertainment,) kicks, stomps, pushes, jumps, dives and other kind of Oscar worthy performances. Perhaps one of my favorites and a few commenters on YouTube mention it too, is when someone tries to challenge Zlatan Ibrahimovic.

“I just love how a guy jumps right into Zlatan, and he was like “really”…

That time Nigel de Jong was only shown a yellow card in the World Cup final for this karate kick should surely be added to this video. Nigel de Jong would be a WWE star. You might have to click over to YouTube to watch this video.

There was that time though that WWE did meet up with some real soccer / football stars. Titus O’Neil, Dana Brooke, Apollo Crews, Drew McIntyre and Mike Rome take to the soccer field during a Manchester United football club practice in Miami alongside players Michael Carrick, David De Gea and Joel Pereira. 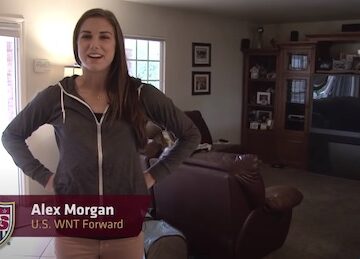 Posted by admin - June 25, 2019 0
The most famous soccer player to come out of Diamond Bar, California: Alex Morgan. While there are a bunch of…

Posted by admin - June 26, 2019 0
I’d like to see some more highlights and video of Nico Calabria playing soccer to see how he dribbles and…

Posted by admin - June 26, 2019 0
Woody steps up and scores the game winning penalty kick in a shootout for Soccer Aid. Woody told reports it…

Posted by John Webster - July 30, 2017 0
If you’re looking for an indoor soccer center in Oklahoma, you’ve come to the right place. Below you will find…