Two soccer players have very similar styles of play. One plays in Europe and the other plays in the United States. They both speak Spanish. One is from Argentina the other is from Mexico. They both dribble the soccer ball in the same way, cutting and turning and charging at defenders with the ball always so close to them. It’s a joy to watch and a nightmare for defenders and opposing teams. I wonder if Uriel Antuna looked up to and modeled his game after Angel Di Maria, because they play the game the same way. They’re dribbling twins. If really want to sound smart you’d say Antuan was Di Maria’s doppelganger.

And here is Angel Di Maria’s twin: Uriel Antuna. It’s not just how they play soccer that is similar, they both even look a like, skinny and with short hair.

If Antuna can become as could as Di Maria then he won’t be in the MLS with the LA Galaxy for very long.

This soccer drill will show you how to burst away from would-be tacklers just like PSG’s Argentine winger. Here’s how to dribble like Di Maria and Antuna! 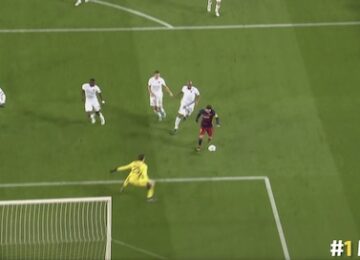 Posted by John Webster - November 12, 2019 0
Sure, Messi and Ronaldinho have scored some incredible individual goals over the years for Barcelona. Or, what about the bicycle…

The Special One – The Managers on Unemployment

Posted by admin - June 26, 2019 0
In this episode Jose remembers back to when he told Lampard he was the greatest midfielder in the world while…

Posted by admin - June 26, 2019 0
If you haven’t played soccer tennis, you must. It’s not only a game that helps you improve your soccer skills…