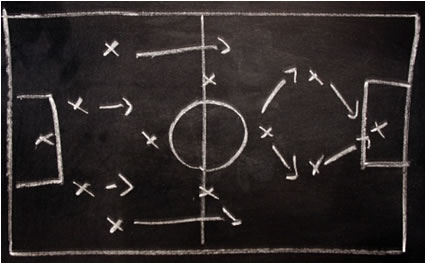 This debate for youth soccer coaches may never end…but let’s see if we can determine the best soccer formation for your soccer team. And the reason you choose a particular formation should have a certain goal in mind.

I’ve got a few bucks in my pocket that bets you might be here for the wrong reason. Most soccer coaches find this article because they want the best formation to “win” soccer games. What they should be looking for is the best formations to “teach” the game. Surprisingly, they are often one in the same.

There have been many arguments (heightened debates we’ll call them) as to which formations are the best for youth soccer players. What I am going to tell you has been proven time and time again and is now endorsed by many national soccer clubs / organizations. This format also basis itself in the K.I.S.S. formula (Keep It Simple Soccer) and “transitional development” for clubs, between age groups. This means that younger players use the same simple thought processes throughout their development, aging, and change of venues. (More players on the field the older they get.)

What this is NOT.
This is NOT an article about the best formations in soccer. This is not a reference for the Premier League, the MLS, or National teams. It is the basis for youth development that teaches players the right thoughts, decisions, and visual keys. It makes the transition between the age levels easier and more developmental. So, please DON’T email me and argue about the “best” formation about “winning”. I don’t do “winning soccer”, I do teaching soccer. I really could care less if we win our games, I want to know that we are learning, getting better, and developing with long term goals in mind. This has not always been my attitude. Much like everything in life, it takes us a while to mature.

The best formation starts with a girl’s best friend… a diamond.
We have to keep things really simple for ALL levels of youth players. We do not want to restrict creative activity / thoughts, but at the same time we want to teach the game and certain thoughts early on. To do this we start the DIAMOND. We all know what the diamond shape looks like. It has four points, one at the top, one on each side, left and right, and one at the bottom.

So, assuming the ball is starting at the bottom point, nearest our goal, we want to get the ball to the HIGHEST point, which is the top, near the opponent’s goal. If that pass is available and safe, that is the one we make. (Option #1) If not, we pass it left or right to the open player. (Option #2 and 3) Now that player should try and get it to the TOP of the diamond. If not they simply pass it back or across. This continues until we can get the ball to the highest point. The shape of this game naturally teaches what the coach wants to teach, three passing directions. Forward, sideways and back.

This is especially important near the midfield. You’ll constantly hear coaches preaching to their players, “Keep the ball, play simple, find feet” and more. Often the team that can control the midfield is the one that has the most success. Having MANY options is critical to players in the midfield. 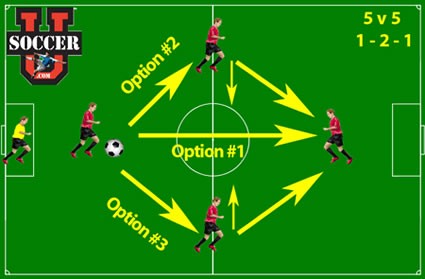 So now you should have the single diamond visual in your mind. This can also be used as a good warm up game for all levels of players. A 20 x 20 yard square, 4 offensive players with one or two defenders. A simple game of keep away that helps players look for open lanes, good passes, and keeps them moving into open space for support.

Making the “transition” to the 8v8
Now that we have seen one diamond and the players understand this basic premise the move to larger teams and fields becomes a bit easier. When we move to the 8v8, we simply position players to form more diamonds. The same basic principles are followed. (2-3-2)
Keep it simple and try and move the ball forward. If you can’t move the ball forward, look to the side. Then let the side try and move it forward. If that is not an option, then pass it backwards. 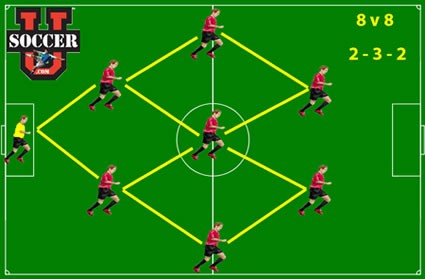 Moving to the “BIG GAME”, the 11 v 11
Our players are now becoming “big boys” and are moving to the 11 v 11 for the first time. By using the 3-4-3 we replicate what they have been taught for years. Look at all the diamonds and keep in mind the keeper plays an important role in the field play. You’ll notice that this formation spaces our team out evenly. We also can push one of the three forwards (center / striker) higher up and still maintain the triangles. Because we give up a defensive player, the defenders must be ready to recover quickly and work on defending skills and communication. Also, the mid fielders must be willing to drop back and help defend when needed. Another benefit of the 3-4-3 is that it allows us to put heavy pressure in the opponent’s third of the field. 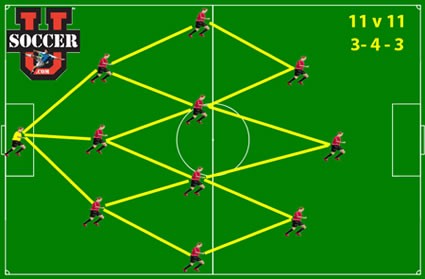 This formation also encourages players to move as a team. They see and understand that the DIAMOND must be maintained. They must move forward and back to maintain the proper shape.

Cure for bunching?
The other BRILLIANT aspect of this is that it often helps cure the “bunching” in soccer. Players start to learn to find OPEN space to maintain “shapes”. They also start to learn that being AWAY from the ball has a real benefit and is a critical part of the game.

“I don’t think the 3-4-3 is the best formation to win.”
Yes, you will hear this often from coaches because they have their own opinions, and that is fine. However, they TOTALLY missed the point of this article. If you are totally concerned about “winning”, you should consider getting out of youth soccer and coach an adult /older team. Winning or succeeding is NATURAL with humans, but in youth sports it is an “inner voice” that somehow needs to be muted. We use the “games” to practice and try what we have learned in practice.

A critical aspect of development.
I can’t tell you how many times I hear it from players. “The coach moved me to center mid and I don’t like it. I don’t know what to do.” Not knowing is not the players fault. It’s the fault of the teacher / coach /club / league. Using an easy to understand, transitional formation cures much of this anxiety. Often a club / league wide commitment is needed to foster these transitional steps.

The light bulb…
It really is funny to see the reaction when I teach this form of simple play to soccer coaches and players. It’s like I’m getting that look that says, “Why didn’t anyone ever tell me this before?” Diamonds and triangles play such a key role in good quality TEAM soccer at the youth level.