Messi when he was a kid: New video of eight year old Lionel Messi doing the same dribbling runs he does for Barcelona in La Liga. Yeah, if you’re a soccer agent and had seen this kid dribbling the soccer ball like this you’d want to sign him up right away.

What stands out about Messi’s dribbling style is every step he takes he gets a touch on the ball. It’s way he can beat defenders, since the ball is always so close to him he can cut one way or the other with ease.

Yes, even 8 year old Messi was unstoppable, especially when he picked up speed with the ball. Kids falling down all around him trying to win the ball. Sliding. Diving in. Force him to use his right foot! Easier said than done even when Messi was just eight! Messi’s left foot at 8 is a lot better than many of the pros playing today. 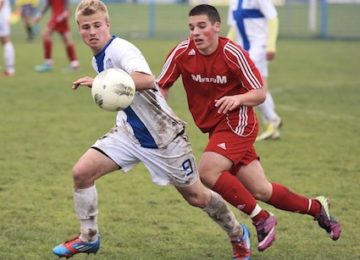 Posted by admin - April 2, 2018 0
Learn five unbelievable soccer moves to beat any defender. The game of football (soccer) has been full of magical moments…

Posted by admin - June 26, 2019 0
By Andrew Winner The Talisman If the United States hopes to qualify for the Beijing Olympics, their hopes rest squarely…

Posted by admin - June 25, 2019 0
David Beckham – Today Show In New York for his first game back with the Galaxy since his loan to…

Posted by admin - June 26, 2019 0
Ronaldo finally bags a goal for Portugal as he goes one versus one with the keeper the ball flips up…