A firm fans’ favourite, Bernardo Silva looks at his own soccer playing style and his time with Manchester City so far. How do you play ike Silva? For one, take players on in the attacking third and don’t be afraid to try things that other players wouldn’t.

There’s talk that Silva could be up for the Ballon d’Or, or world footballer of the year. Yes, you have to put Silva in the same class as Messi, Neymar and Ronaldo if he keeps playing the way he has for City.

Manchester City & Portugal star Bernardo Silva takes on the 5 Shot Challenge with Poet and Vuj, and talks about the title race with Liverpool, his teammates fashion and more. What a signing Silva turned out to be by Pep Guardiola, he’s certainly a very underrated player in the EPL and in world football in general. He’s so creative with the soccer ball, always making things happen.

Here’s what Pep Guardiola had to say about Bernardo Silva. And Pep has of course coached and managed some of the best soccer players in the world. I think he’s right. Silva is a unique soccer talent because of the way he takes chances and is creative – no defender would want to face him because you don’t know what he’s going to do next. Pep also talks about his work rate:

“In the locker room he’s the guy who’s the most beloved in our team, and his skills… he can do absolutely everything, he’s one of the most talented players I’ve ever seen in my career as a manager or a player.

He’s a humble guy, he can play three of four positions. He’s always an eight or nine (out of 10). He knows when he doesn’t play good it doesn’t matter because he runs the most.”

Posted by admin - June 26, 2019 0
By Michael Shanks In local neighborhoods of Brazil and other countries, the kids that are the most skilled often are…

Posted by admin - June 25, 2019 0
Official Adventures of Carlos Valderrama These videos are more apt for something on Conan O’Brien than this soccer site but…

Posted by admin - June 26, 2019 0
Beckham scores the first and has a hand in the second as LA beat Toronto. Looks like this Beckham experiment…

Posted by admin - June 25, 2019 0
Barcelona 27 Passes Before Messi Goal You’d think the 27 pass Barcelona goal was scored in a friendly or maybe… 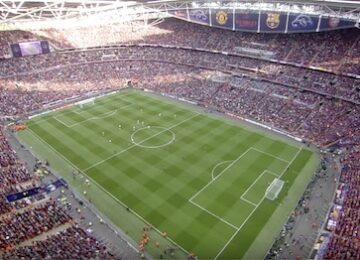 Posted by John Webster - April 2, 2020 0
During this difficult time, while we all stay inside, why not watch one of the greatest soccer teams to ever…