Let’s see if we can learn how to play like Jadon Sancho. Perhaps we can pick up some of his soccer tricks and dribbling moves. What stands out about Sancho’s style of play is he’s always dangerous, looking to attack and keep defenders guessing. He’s not afraid to take players on and grew up playing street soccer in England.

“After school, I just wanted to play football. All around me, there were people who did bad things, but I never wanted to deal with them,” Sancho said.

Jadon Sancho works his magic in the Bundesliga! People keep asking how Manchester City could let a player like Sancho leave their club. You can see why in the video below. How to play like Jadon Sancho? Well, you’ll need to develop Messi like control and dribbling skills and Neymar like flair and tricks.

Jadon Sancho sits down with Craig Mitch to discuss the starlet’s first impressions on team spirit, life in Bundesliga, Wayne Rooney, and his England role models.

“This kid is the truth. He’s got everything. He’s got skill, pace, tenacity, desire, commitment, he gets goals. He’s top assist man in Europe at the moment. He’s potentially the best talent we’ve got bar none.”

I wouldn’t be surprised if Jadon Sancho is on Real Madrid and Barcelona’s shopping list this summer.

“I was on an estate. There’s a park behind that we called Blue Park, and we used to just go there and for two hours just play mini games, everyone used to get so into it,” Jadon Sancho told ​Sky Sports. “I used to have all the tricks, nutmeg people, and I was doing it like the older boys.”

Jadon Sancho’s backheel nutmeg pass. Take a look at this genius. He’s got skills and confidence to try things.

Columbus Crew at the White House

Posted by admin - June 26, 2019 0
Columbus Crew at the White House The President welcomes the Columbus Crew, Major League Soccer Champions, to the White… 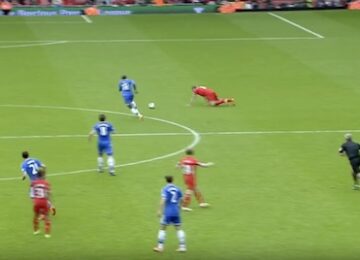 Posted by admin - June 26, 2019 0
Could this slip by Steven Gerrard have cost Liverpool the English Premier League title? Gerrard takes a pass near…

Posted by admin - June 26, 2019 0
Every touch of the ball by the greatest player in the world, Lionel Messi, versus Real Madrid. The camera focuses…