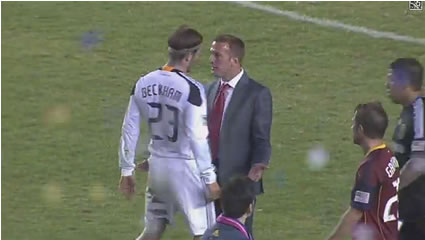 It looks like Beckham is just going around shaking all the players hands and then Kreis yells something at Beckham and they get right in one another’s faces and other Galaxy and Real Salt Lake players have to separate them. Take a look. Really, you’d like to see more of this “intensity” more often in MLS games.

But the two seemed to have made peace now, as Jason Kreis is one of David Beckham’s assistant coaches at the club he bought: Inter Miami. I’m sure Beckham appreciates Kreis’s passion for the game and desire to win. Still funny though to see the two go at it almost after the game.