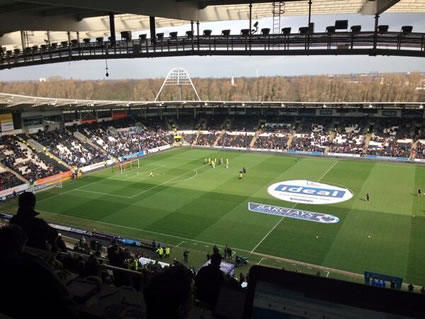 Imagine an alien sitting in space in his flying saucer, watching the television broadcast signals coming from the planet. One program that he sees almost more than any other is this strange game where humans run around kicking a ball.

It also seems that humans become ecstatic at putting that ball into a designated rectangular area with white posts and a net. After watching this game for a while, the alien decides it’s not so boring after all. He begins getting somewhat excited when a team scores a goal, and eventually develops favorite teams and players. After a few days of watching the sport, he’s hooked.

Soccer is addicting. There is no doubt about that. This infatuation takes a great deal of our time, attention, and money. We think of soccer and sports in general as somehow representative of something more. If we didn’t, we wouldn’t care to watch people doing such a “pointless” activity in the scope of the world’s issues.

Is soccer a reflection of life? You have ups and downs, goals made and missed, and hard work, creativity, intelligence, and intuition determining the outcome. Despite acknowledging these parallels, people argue that the sport is still pointless in the grand scope of things. I believe that yes, some of the excessive amounts of money spent on soccer should go toward helping hunger and poverty.

However, I hold that soccer and sports are nevertheless important for human culture. We need to see life played out in a created environment as metaphor. We let our emotions take hold of us, yet knowing in the back of our mind that that no real consequences are on the line. Doing so satisfies or completes some emotional void of high and low levels of stress that we don’t encounter naturally in today’s world.

Read more about the beautiful game of soccer below.

Here’s video of Northern Ireland fans singing Sweet Caroline. This is how much joy fans get out of supporting their soccer team and their country. Yes, soccer is a special game. Yes, soccer brings people together.