Here’s a good rule when facing off versus Neymar: never rush at him and try to close him down too fast! Neymar will just embarrass you. Neymar uses the bottom of his foot to bounce ball over a defender you charges at him.

This video is from when Neymar was still playing for Santos in Brazil, before he moved to Barcelona and then to PSG. I used to think they Neymar maybe did too many soccer tricks and moves on the field, but really, he’s probably holding back some what on just how many moves he can do. It’s clear that Neymar had to leave Santos and go to Europe for more of a challenge.

This Neymar move reminds of when Pogba did something similar while playing for Manchester United. Pogba used the bottom of his soccer shoe to bounce the ball up and over a defender when he had his back turned.

The Stop and Go Move in Soccer

Posted by John Webster - August 25, 2018 0
For this move, change of pace is key. Jog slowly with the ball, usually when a defender is along side…

Posted by admin - June 26, 2019 0
Agudelo, in his first start for the U.S. national team, scores the game winner. What stands out about Agudelo is… 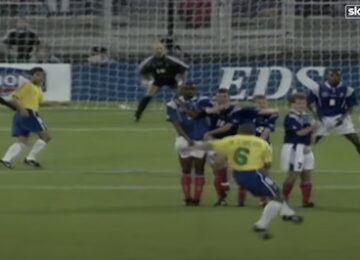 Posted by admin - June 26, 2019 0
The Roberto Carlos free kick: Amazing free kick from the Brazilian defender Carlos with the outside of the left foot…

Posted by admin - June 26, 2019 0
Nani got the second goal for United, a clever flick with his heel, and in the video below he gets…

Posted by admin - June 26, 2019 0
By Tom Sheldrick As April 1st arrives across the top European leagues, entire seasons race towards their climax. There are…