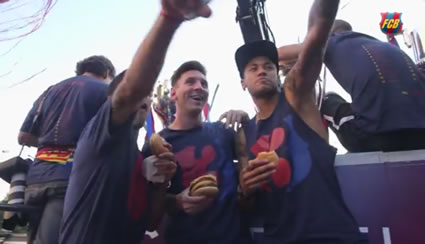 It’s a bit funny to see millionaires so excited about free food. During the Barcelona victory parade, Neymar and Luis Suarez are almost happier about getting to eat what looks like free McDonald’s hamburgers, that it seems some random fan has thrown to them atop their bus than having just won the treble. Even Messi is dragged into the hamburger excitement but he seems to be the only one who’s actually concerned about where the hamburgers came from, as in who in the world gave them the hamburgers and are they safe to eat.

But maybe this is just some crazy clever product placement advertisement by McDonald’s, having someone from their fast food chain throw the bag of hamburgers up to the Barcelona stars. Take a look at the video below of Messi, Neymar and Suarez enjoying a hamburger on a bus!