This is one of the better goals you’ll ever see in the English Premier League or any soccer league for that matter. Mesut Ozil with some magic for Arsenal as  they come from behind to beat Leicester City. First it’s Ozil’s flick pass and then the dummy and finally his deft flick like cross to Pierre-Emerick Aubameyang for the goal.

It’s not often you see top professionals so happy after scoring a goal, since they’ve scored so many, but you can tell this one is special in how excited and happy Ozil is after the ball hits the net and he celebrates with Aubameyang. In about ten passes and a dummy Arsenal are up the field and score.

It’s an absolutely killer pass though from Lacazette, too. Not easy to take the weight off the soccer ball like he does and put it through for Ozil. Lacazette reads the dummy run by Ozil perfectly and returns the ball to him on a platter. This is the type of sequence of passes or patterns that your youth teams should walk through and then run through and try to pull off in a game.

Posted by admin - June 25, 2019 0
Adebayor Bicycle Kick Rivaldo scored a bicycle kick that actually tops this one by Adebayor, but this is a spectacular…

Posted by admin - June 26, 2019 0
At just 26 years old, Clark could be signed by a European side. His play in the Confederations Cup has… 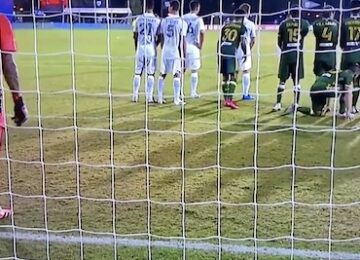 Posted by John Webster - July 14, 2020 0
They call him Chucky. Yes, that Chucky from the movies. Portland Timbers midfielder Sebastián Blanco is a crafty and very…