As a team keep the game flowing by swinging the soccer ball from one side to the other to find the best ratio of numbers and the most space. On offense you want to have more attackers than there are defenders. On defense, more defenders.

The game of soccer is finding those situations where you have the numerical advantage. Pretty simple, right. One way to do that is switching the ball from one side of the field to other. Release pressure by switching the ball to the other side of the soccer field when the side you’re on gets over loaded with players.

If you watch the best teams in the world, like Real Madrid, Barcelona, Bayern Munich or Manchester United, they move the ball from one side of the pitch to the other looking for space and a numerical advantage. Draw the other team to one side of the field and then quickly switch the ball to the other side when they start to close you down.

Try playing the ball into the forwards feet, so the defense collapses into the center, and when the forward lays the ball back, you can swing the ball out wide and into the corner to get a cross off. There are a number of different ways to switch the ball, and open up the defense, but the key is to keep the ball moving and play one and two touch soccer.

Break down a packed defense by dragging the opposition out of position, says West Ham United’s Academy director, Tony Carr.

Liverpool captain Jordan Henderson takes LFC International Academy coach Andrew Nicholas through the art of the cross-field pass, and the advantages of executing it well.

Posted by admin - June 26, 2019 0
By Jeff Kassouf Surely those in charge of the United Soccer Leagues are happy that the Rochester (no longer “Raging”)… 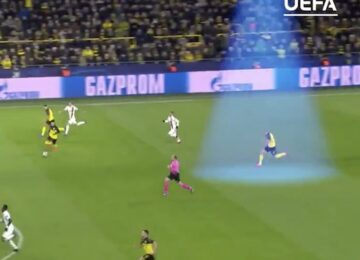 Posted by John Webster - February 24, 2020 0
Perhaps Erling Haaland is so fast because of the special drink he drinks before he steps on the soccer pitch?…

Posted by admin - June 26, 2019 0
Did the two of them dream about something like this? Coaching your son is common when you’re a youngster, eating…