What is the best soccer rebounder to buy? Every young soccer player should have a soccer rebounder. A wall. Something to kick the ball at and get it back. It’s like having a teammate or someone to pass to, shoot at. It’s the core part of developing your skills as a player. Ask any professional soccer player and they will tell you they spend hours smashing the ball against a wall of some kind. It’s tough sometimes to find a wall to play the ball against that doesn’t have some windows nearby that are susceptible to being broken!

Kwik Goal has a number of soccer rebounders to choose from, which are easy to assemble and move around the field to work on different aspects of your game. The Variable Angle Training Board is my favorite, especially for young players just starting out. It has everything you need in a kick board. The best soccer rebounder that you can move around the field with ease. Every soccer player should have a wall to smash the soccer ball against.

Here’s soccer legend Dennis Bergkamp talking about using a rebounder / wall when he was growing up:

“Most of the time I was by myself, just kicking the ball against the wall, seeing how it bounces, how it comes back, just controlling it. I found that so interesting! Trying it different ways, first one foot, then the other foot, looking for new things: inside of the foot, outside of the foot, laces… getting a sort of rhythm going, speeding it up, slowing it down.

Sometimes I’d aim at a certain brick, or the crossbar. Left foot, right foot, making the ball spin. Again and again. It was just fun. I was enjoying it. It interested me. Maybe other people wouldn’t bother. Maybe they wouldn’t find it fascinating. But I was fascinated.”

Posted by admin - June 26, 2019 0
One of the more unique runs up to a penalty kick that I’ve ever seen. Juventus star Paul Pogba’s got…

Posted by admin - June 26, 2019 0
When Thierry Henry wakes up in the morning and looks out his window at the New York City skyline, he… 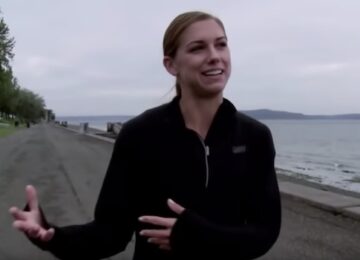 What Does Alex Morgan Do On Game Days?

Posted by admin - June 25, 2019 0
Alex Morgan takes you through what she does on a game day, from an early morning walk and Yoga, to…

Posted by John Webster - June 18, 2020 0
Arsenal’s David Luiz comes on as a substitute early in the game after an injury to Pablo Mari and had…