The Home Depot Center was referred to as “The Cathedral of American Soccer” when it first opened in front of a sell-out crowd in 2003. To the credit of the progress being made by Major League Soccer and its teams, the stadium has already, by some people’s standards, been outdone by the likes of Toyota Park in Chicago and will only continue to be put to the back of people’s minds as the New York Red Bulls and Real Salt Lake open their new stadiums.

Here’s David Beckham’s debut for the LA Galaxy at the Home Depot Center:

However, The Home Depot Center does serve as the model of the current soccer specific stadium in the United States; smaller seating capacities for a more intimate experience, a roof to keep the noise in and the elements out, and a sponsorship to help pay for the debt brought about by the construction. Though newer stadiums will continue to one-up “The HDC,” it will always be known as the original breakthrough in the modern soccer specific stadium (with no disrespect to the Columbus Crew, who opened the first soccer specific stadium in Major League Soccer in May of 1999).

The Pros: As is the case with every new soccer stadium in the United States, there is not a bad seat in the entire stadium. Even the upper deck is right on top of the action, and offers a perfect view that would rival any lower level seating in a larger football stadium. The concourse is easy to navigate, and is open on the ends, meaning you can view the game perfectly even while walking around. There are even suites that include a stadium restaurant behind one of the end-lines. The ten practice fields that surround the complex (which also boasts major track & field and tennis stadiums) are beautifully lined by palm trees, and the entire complex is a site to see.

The Cons: As lovely as the complex is, Carson is thirteen miles south of Los Angeles, and with So Cal traffic that can equate to a lot of time in the car. The length of the ride is not the main problem, however, as the community the stadium is situated in is not apt to handle over twenty thousand people at once, and nor is the parking. I was there in 2005 when Real Madrid played an exhibition against Los Angeles, and the stadium was unofficially oversold (by my estimation) by at least one thousand people.

The general admission grass berm was full, and people were standing five deep in the concourse to watch the game. Literally, cars with multiple people in them abandoned their drivers to try to walk the final distance on Victoria Street in order to get to the game on time, and Carson isn’t exactly Beverly Hills. Combine these parking and trafficking problems with the usual LA traffic fiasco and you have some serious trouble, which is where most of the deductions from the stadium’s grade come from.

Overall, though, the final grade comes down to the stadium and quality of the experience on the inside, and The Home Depot Center offers an experience that every American soccer fan should take in at one time or another. 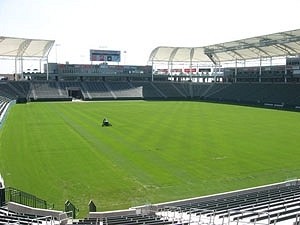 Jeff Kassouf is a staff writer for The New Paltz Times and a freelance writer who covers soccer, and can be reached at: jeffkassouf@yahoo.com