However, the two bars that stand out are Mad Dog in The Fog and the Kezar Pub.  They both make catching games really easy, they have a soccer hotline, with game times and re-play times, so if you have to actually work and can’t see the game live.  Mad Dog’s soccer hotline: 415-442-7994.

Below you can find other great bars in your part of the world.  If you don’t see a soccer bar listed that should be, please send us the info and we’ll add it: soccertraininginfo @ gmail.com (remove the spaces to email us)

As an example, I caught an amazing Champions League game at Kezar a while back, Chelsea versus Barcelona, a 2-2 draw, with a last minute goal by Drogba, to essentially seal Chelsea’s advancement into the next round and make it more difficult for Barcelona.  A good crowd gathered at the bar, about half supporters of the English side and the other half for the Spanish club and reigning holders of the Champions League trophy. Dutifully, everyone was eagerly watching and cheering great plays, from tackles to near misses on goal.

If you want to add to the excitement of the soccer game, check out the best online betting sites to put your money where your mouth is for your favorite soccer team.

Both bars have ample seating and serve a wide variety of beers and good food. Mad Dog is located in Lower Haight (try the sausage spot across the street – Rosamunde) and Kezar at the end of Haight Street at the start of Golden Gate Park. Take a trip to either soccer bar and you’ll be satisfied, but I’m sure this depends upon the result you’re hoping for in the match.

Thank you to all of you who voted us the best soccer bar in Chicago, we are now in the running to become number 1 soccer bar in the USA.

The Three Lions Pub
Three Lions Club members and their guests can relax in a traditional English-style pub located on the second floor of Blackbaud Stadium. The pub contains soccer memorabilia from around the world, a cigar-smoking saloon with leather couches, a big screen TV, foosball, pool tables, darts and much more.

In England, each Saturday afternoon from August through May, hundreds of thousands cram the nation’s stadia to cheer the local side. It may only be 10 a.m. over here, but at MCCORMACK’S PUB AND RESTAURANT the Guinness is guzzled and Irish breakfasts are wolfed down while the games are beamed in live via satellite. There are a few other soccer bars in town, but none can match McCormack’s warmth and feel of authenticity. Proprietor Barry McCormack, once a star Irish footballer, makes sure that there’s a steady diet of soccer and sports from the Motherland all week long. The food’s good, too. -Stu Hackel

Irish pub that features an extra long bar and 11 satellite TVs (plus a big screen) showing soccer games. Burgers, sandwiches, and salads, along with a few Irish and English dishes can be enjoyed, with of course, lots of beer to chug it all down!

McGann’s features standard American and Irish pub food, with a bar that serves beer, wine, and cocktails. Patrons comment that it’s a great place to watch soccer games, especially the FIFA World Cup, in addition to major European matches, which includes champions leagues and premier leagues. Six TVs are set up around the bar, including a huge projection screen that’s situated across the main tables.

Known to locals and visitors as ‘The Place To Go’ Banshees offers traditional English fare, international dishes, an extensive selection of beers, and of course, frequent soccer and rugby matches.

Brit’s Pub in downtown Minneapolis first opened its doors way back in 1990. Since then it has grown from a small two-room tavern into the much larger institution it is now. Additions over the years included the Long Room in 1994 and the world-renowned English Garden Park, complete with its 10,000 square foot Lawn Bowling green, in 1998.

In 2006 Brit’s continues to expand with the opening of two new spaces; The Veranda Bar – an outdoor rooftop bar overlooking the English Garden Park, and The Clubhouse – a comfy cocktail and party lounge with views over Nicollet Mall and Peavy Plaza.

This cozy spot is perfect for watching soccer games. With two big screen TVs, plus several smaller ones, and Setanta hosting, you’re always guaranteed a good seat and a good game. Also, the food is good enough to attract players from the local hockey team, Blues, so what more could you ask for?

With a slogan that states, ‘Where soccer is home,’ you’re bound to watch quite a few matches here! In fact, you can cheer on all your favorite European teams in the National Leagues or in the European Cups provided by Setanta. The menu is standard bar food, but the beer is plentiful and the soccer is always on the TV!

Big John’s brings in soccer games on seven different channels to cover as many as possible. Over 65 TVs are scattered throughout the bar, airing a variety of other sports as well. Pool tables, darts, and other games can be enjoyed too, in addition to American, Irish, and standard bar fare. Want beer? Take advantage of a wide selection of draft and bottled beers.

The Londoner constantly has a soccer game on for you to enjoy, shown on Setanta Sport and other PPV channels. English fare and beer accompany soccer matches, while pool tables and darts provide other gaming options.

Plasma and digital TVs air plenty of soccer – English Premier League, UEFA Cup, Bundesliga, the World Cup, and much more. While watching the game, chow down on a vast array of dishes from American and international cuisine, in addition to authentic English food and draft beers. Traditional pub games are available too, even a Bar Billiards table.

Cock and Bull Pub
2947 Lincoln Boulevard
Santa Monica, CA
Plenty of TVs abound to watch soccer, such as the English Premier League, Champions League, FA Cup, and other big European leagues. While watching the game, enjoy typical English food and a moderate selection of beers. If you’re lucky, maybe a celebrity such as Sting will pop in, as reported by some patrons.

Fado Irish Pub
214 West 4th St.
Austin, TX
(512) 457-0172
An Irish pub serving other major cities as well (such as Chicago), Fado is home to great soccer. Watch the English Premier League, Coca Cola Championship, among others in what patrons call an “unusual” atmosphere. Irish food, salads, standard American bar food, plus beer and countless varieties of whisky can be enjoyed while watching the game.

Posted by admin - June 26, 2019 0
Don’t know the details but Puma must have given Henry a nice sum of money to switch from Reebok to… 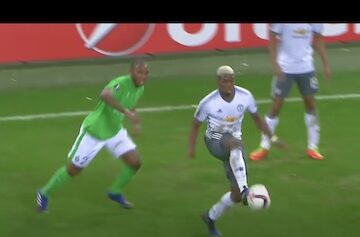 Posted by admin - June 26, 2019 0
With the sole of his foot, Paul Pogba bounces the ball up and over the head of the defender’s head.…