The handball in the USA versus Germany game in the 2002 World Cup. Gregg Berhaltter’s volley appears to hit the hand of the defender, Torsten Frings, after beating the German goalkeeper Oliver Kahn.

The most important goal in American soccer history that was not to be. Taken away by a poor call by the referee. If only there was VAR back then. At least Frings wasn’t intentionally trying to block the shot with his hand. Looks like the ball hits his hand more than anything, but still.

It’s funny, now of course the coach of the U.S. team is Greg Berhalter. He would have been a legend. This is what Berhalter said about the handball:

“We had other chances also. That wasn’t the only one,” Berhalter said. “It wasn’t like it paralyzed us. We played an excellent game. It had more implications because it would’ve been a penalty kick and red. It could’ve positioned us to go to the next round.”

I’m hoping Berhalter has a Torten Frings jersey framed up on his wall somewhere for irony’s sake. Here’s video of the 2002 World Cup Quarter Finals: Germany vs United States controversy: the handball by Frings. 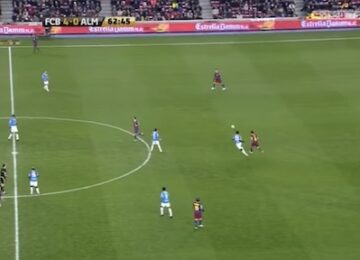 Posted by admin - June 26, 2019 0
There’s an endless variety of soccer passing patterns and soccer drills that can help your team expand and hone its…

Posted by admin - June 26, 2019 0
Who’s good enough and has the guts to wear the pink Mercurial shoes? None other than the Frenchman, Ribery. Here,…

Posted by admin - June 26, 2019 0
As soccer fans, we all know what Landon Donvoan looks like, so this really is about his wife, Bianca Kajlich,…