I’m thinking that when football returns a new Pogba will appear, or should I say the old Pogba will return and show the Theatre of Dreams just what he’s capable of. Pogba is the type of soccer player that needs freedom to do his thing on the soccer field. If he has that, watch out. Pogba does the unexpected, the flick or pass that other players don’t see. Pogba, like all soccer greats, plays the game with ease.

Posted by admin - June 26, 2019 0
Dynamo Missing Jaqua, Ngwenya By Andrew Winner The Talisman The Houston Dynamo find themselves in the cellar of the Western…

Soccer Camps Outside the US

Posted by admin - June 26, 2019 0
Learn to play soccer with some of the best clubs in the world. Soccer Camps International www.soccercampsinternational.com  – The leader… 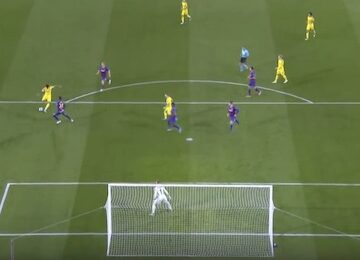 Defenders Putting Hands Behind Their Backs

Posted by John Webster - November 30, 2019 0
Remember when you played youth soccer and certain soccer players would clasp their hands together when they headed the ball?…

Posted by admin - June 26, 2019 0
A harsh tackle by Ribery on Lyon’s Lopez and he gets a very well deserved red card straight away.  …