Learn five unbelievable soccer moves to beat any defender. The game of football (soccer) has been full of magical moments since its inception, primarily due to the efforts of some unbelievable players who have left a lasting mark on the sport through their signature moves. The top players in the world today, players like Messi and Neymar, both have favorite moves, but below are some classic soccer moves that will always remain part of the beautiful game.

It is these magical moments that attract fans by the thousands to football games all over the world, and also contribute to betting interest in the game’s outcomes. We’ve compiled a list of the most iconic football moves in the history of the sport, along with a step-by-step guide on how to perform these unbelievable soccer moves.

The Cryuff turn is an excellent soccer move when you are dribbling forward with a fair bit of pace, and have a defender sprinting alongside you to take the ball from you. To execute the Cryuff Turn, place one foot on the ball and gently drag it back behind your standing foot, and there after swivel quickly and proceed to accelerate away behind the defender.

This is a move that will be deadly for your opponent side, especially if you have quick, agile feet and are able to execute the move with precision. In order to perform this move, gently push the ball forward with the inside of one foot, and then quickly do a scissor with the same foot. Thereafter push the ball away using an outside touch with your opposite foot. This move works well against defenders because they’re expecting you to cut the ball inside than the outside, and end up getting deceived in the process. This is of course one of Ronaldo’s favorite soccer moves.

The elastico is a quick and lethal move, and if executed properly it can even cause the opponent defender to stumble or fall over. While the Elastico may appear to consist of two touches in quick succession, it actually only consists of one slick motion. To perform the Elastico, gently push the ball forward from the outside part of one foot, and then quickly nudge it to the opposite side using the inside of the same foot. This move requires a lot of practice to get right, but is worth every bit of the effort in an actual football match.

Performed by the French legend on several occasions, to the embarrassment of his opponents, the Zidane roulette is a handy move to get past your opponents in a one-on-one situation. Really, it’s a unique move that you don’t often see pulled off in a game. Sure, players try it but usually loose the ball or look pretty awkward trying to pull it off. Zidane however, had tremendous grace when he played, so he could spin around defenders with ease.

True to this consistent performance, a recent face-off between Zidane and his son shows that the former-Real Madrid star has still got the moves from his younger days. To carry out the move, place one foot on the ball and lighty pull it back, thereafter quickly turn around so that your back is facing the defender, and while you’re executing the turn, drag the ball further back and past the defender, and nudge the ball away to continue on your run.

Created over 50 years ago by the English football legend Stanley Matthews, this technique is also commonly referred to as ‘dropping the shoulder’. While facing an opponent, simply touch the ball with the inside of your foot before flicking it the other way using the outside of the foot, in one slick motion. This soccer move ensures that the ball keeps moving in your territory, making it difficult for the defender to steal it away.

Perhaps the best player to do this move in the modern game was Manchester United’s Ryan Giggs. Who, with a full head of steam, dribbling at pace at the defender, love to cut inside and then outside, often making the defender fall down as he tried to keep up with Giggs. 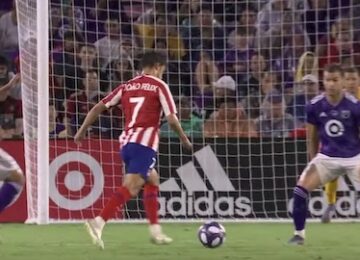 Posted by John Webster - August 18, 2019 0
So you want to learn how to play like Joao Felix. I don’t blame you. Felix has a unique style…

Posted by admin - June 25, 2019 0
Ball Control Drills Top soccer players have to mastered the soccer ball. What does that mean? That means they…

Posted by admin - June 26, 2019 0
Robbie Fowler snorting the touchline after he scores. The famous goal celebration by Liverpool legend Robbie Fowler. That was quite…

How to Drag Defenders Out of Position Like Barcelona

Posted by admin - June 26, 2019 0
How to Drag Defenders Out of Position Like Barcelona One of the key things that Barcelona players do is…