Who knew that after Alex Morgan’s amazing World Cup tournament, she would sign with Barcelona? No, of course that’s not true, but she sure does look good in a Barcelona kit. Don’t you think…And it’s really an awesome photo of Morgan and Kobe Bryant, too. Still though, imagine Morgan stepping out on the Camp Nou pitch in a Barcelona jersey. Of course she’d wear her favorite number thirteen.

Kobe has always been a big soccer fan since he grew up in Italy. But it’s interesting that Morgan only played briefly in Europe, you’d think she might want to give it one more go and Spain would surely be a nice place to live. Just think, Messi and Morgan playing for the same football club. 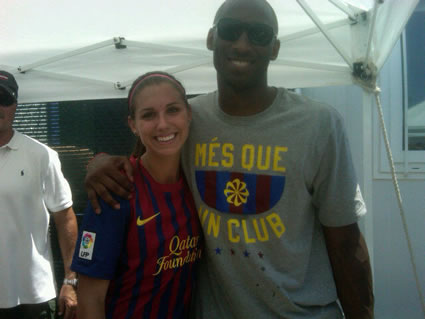 Morgan was on hand to play in Mia Hamm’s celebrity charity soccer match, along with Pep Guardiola. Watch Morgan score a very nice goal with her very good left foot:

Some soccer fans grab autographs from Alex Morgan and Pep Guardiola before the game. The fans almost seem more excited to get Alex Morgan’s signature than Pep’s.

The American international attends at the victory and meets Gerard Piqué, Paulinho and Thomas Vermaelen.

If you’re Morgan though, why not go out on loan to Barcelona? Just to play a few games at the Camp Nou.