What do they say, speed kills. As in nothing like speed to cover up any weaknesses or make a player crucial to a soccer / football side. Alphonso Davies is a unique outside defender in world football. I don’t know if there’s ever been a football player like him. A forward converted into an outside back with speed that kills. The potential Davies has is incredible. He’s going to change the position, no longer will defenders play so conservatively and break up plays they’ll be potent in the attack too.

Alphonso Davies is FAST becoming the best outside defender in the world. And not just for his speed, although that is key. As has been said too: speed is a multiplier of all your other soccer skills. How fast is Davies? He’s certainly one of the fastest players in the entire German league.

Since joining Bayern Munich and moving from the front line to the back line, Davies is helping to setup goals and prevent goals. Watch him chase back to win the ball with ease. Reminds me somewhat of DeAndre Yedlin chasing back to win the ball, not sure who’s faster.

Alphonso Davies is going to make a lot of money soon. He’s also becoming TikTok famous for some of the videos he posts on social media.

You’re gonna have to be a lot faster than that to get away from @AlphonsoDavies… 👀⚡️ pic.twitter.com/6BRQSGUkM2

Here’s more proof of just how good Davies has become and not just because he’s fast in the video below. Although his speed is what is talked about the most these days. Davies teammate, forward Thomas Mueller, compared him to the Roadrunner, using the meep meep sound affects and all.

“A player with a lot of heart and with extreme power,” said Mueller, a 30-year-old Germany international. “Although sometimes he has not the best position. When the opponent thinks ‘Oh, I have time,’ ‘meep, meep, meep’ the Roadrunner comes and steals the ball.”

How about that for an assist! With the score still 0-0 in Bayern’s away clash with Freiburg, the Reds’ Canadian left-back Alphonso Davies claimed possession in his own half – and ran virtually the length of the field before setting up goal machine Robert Lewandowski!

It was Davies’ second assist of the campaign and Lewandowski’s 19th goal of the season in the 16th match, a feat most recently achieved by Bayern legend Gerd Müller back in 1976/77!

An incredible record for the Poland superstar, who now climbs to third on the Bundesliga’s all-time goalscoring chart with 221 goals. The only men still ahead of Lewandowski are Klaus Fischer on 268 goals and Gerd Müller on 365. What do you think? Will Lewandowski actually manage to break Gerd Müller’s record of 40 goals in a season from 1971/72?

Posted by admin - June 26, 2019 0
Nike recently introduced the 2010 national team kits for this summers World Cup in South Africa. Below are two of… 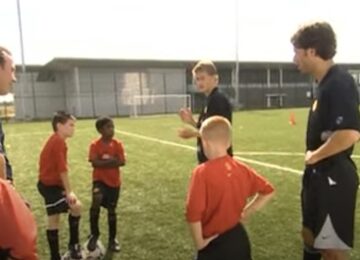 Posted by admin - June 26, 2019 0
In keeping with their revival movement, the San Jose Earthquakes have hired former midfielder and fan favorite Ian Russell as…

Posted by admin - June 25, 2019 0
Visit our blog page for new soccer content. Compilation of the best Barça style goals with more than 20 passes.…

Posted by admin - June 26, 2019 0
Great tackle by Gerrard – an aggressive play but fair and makes a statement for his team. That’s why he’s…