Of course one of the greatest rondos of all-time would involve Lionel Messi and Sergio Busquets and Barcelona. I can’t quite make out who’s running around all incensed with rage as Messi calmly kills the ball with his deft touch. The two in the middle try to run harder and faster and win the soccer ball but that’s usually the opposite thing to do when stuck in a rondo. You suffer a great deal if you end up in the middle of a Barcelona keep away game.

Don’t let your emotions get the better of you or you’ll never touch the ball! And this rondo of possession his four versus two, usually it’s five versus two. The offensive player due get two touches though rather than the usually one in a regular rondo of five. Watch this Barcelona rondo masterclass. I think I counted thirty consecutive passes. 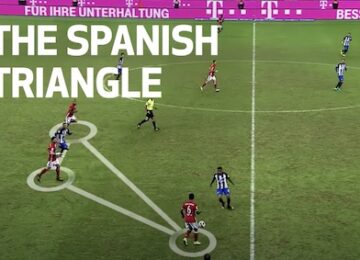 Posted by admin - June 26, 2019 0
Dirk Kuyt Compilation The Dutchman can play almost any position, really. I’ve yet to see him play say as a…

Posted by admin - June 26, 2019 0
Low to the ground, a strong center of gravity, tough to knock off the ball, quick and agile. This group of…