Playing the role of defensive midfielder is far from glamorous and it is highly likely that your contributions will get largely overlooked in favour of an in-form striker or an outstanding goalkeeping display, but it remains a vital part of any soccer squad. Defensive midfielders do the dirty work but rarely receive the accolades. We take a look at what it takes to emulate the likes of Claude Makelele and Patrick Vieira. Former Arsenal midfielder Patrick Vieira was one of the finest soccer players ever to grace a Premier League pitch and the current New York City FC boss says the key to any defensive midfielder is “understanding your role and accepting it“.

In the position of defensive midfield, you will rarely make headlines, but your performance can often dictate the flow of the soccer game and an underwhelming performance sometimes transmits to the rest of the team.

Being tactically aware is the most important aspect of any defensive midfielder’s role and the ability to protect the back four. Anticipating the next attack and putting a vital foot in, slowing down play or simply halting the run from midfield can help relieve the pressure on your defense and significantly reduce the likelihood of conceding a goal.

There are many high-profile examples we could look at, but Wigan’s Sam Morsy has been enjoying an excellent season operating in this capacity and his side have benefited from his experience and expertise in recent months. The Latics have conceded just 13 times in their first 28 matches and whilst the Egyptian has only missed two games this season, his side conceded four times during his absence. He wins the ball, breaks up play and helps his side drive forward.

One of the most important skills a defensive midfielder requires is the ability to take charge of any situation and not be afraid to cover all positions. Stepping in for a right-back, who has marauded forward and been caught out of position or becoming a third centre-back when under immense pressure late in a game are all responsibilities which should not be shirked. One of the core qualities is being able to communicate with teammates and to fully understand the team’s formation and tactics.
Defensive midfielders need to be physical. It’s absolutely essential that you aren’t bullied by the opposition and it’s always advised to impose yourself early in the game.

Make your presence felt in the opening few minutes and this will not only increase your own confidence but it’ll also show your opponent that you mean business and you won’t be giving them much room throughout the 90 minutes. Players such as Sunderland’s Lee Cattermole are magnets for yellow cards, and that is one of the perils of this position. Under no circumstances are we suggesting that you should slide in and make a crude challenge in the opening ten minutes but it is advised to simply stay close, put a foot in and win the psychological battle early in the encounter.

Most of the play goes through a defensive midfielder, making it one of the most important and dependable positions on the soccer field. It requires hard work and dedication to hone your craft but any budding player who wishes to operate in the engine room would be advised to study the movement and physicality of Claude Makelele, Patrick Vieira, Sergio Busquets and Xabi Alonso and take note of the pivotal role they play.

It may not be the most glamorous position on the field and may feel like a thankless task but it will certainly earn you plenty of respect amongst your peers.  Being a defensive midfielder is hard work but can also be a hugely rewarding role if you can help guide your team to glory.

Here are some highlights from Patrick Viera’s time at Arsenal.

Posted by admin - June 26, 2019 0
Eric Cantona, the former star for Manchester United, takes aim at those who throw elbows in this funny clip. Check it…

Posted by admin - June 25, 2019 0
Jozy Altidore Debuts for Villarreal The kids has got guts and looked eager to earn a place on the Villarreal…

Messi Can Play Defense, Too

Posted by admin - June 26, 2019 0
We all know Lionel Messi knows how to dribble the ball and cut through opposing defenses, embarrassing them even, as… 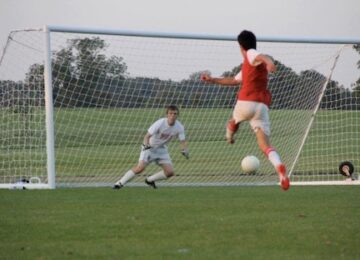