What is Dortmund’s style of football / soccer? Let’s find out how Borussia Dortmund are were able to keep up with Bayern Munich in the Bundesliga, mainly under Jurgen Klopp. To me, Dortmund style of playing football / soccer is Barcelona’s Tiki Taka turned up full blast. So they keep the soccer ball but play at a faster pace, both in attack on when pressing on defense.

It’s heavy metal football turned up full blast! The Dortmund style of play makes the opposing team’s heads spin. The ball moves quickly in attack and if they lose it they pounce on you with numbers. This style of play requires every player to be in perfect shape and technically brilliant on the ball.

One soccer player that raises the level of play at Dortmund is Mario Götze. And he has scored plenty of beautiful goals for Borussia Dortmund. We’ve picked 5 of the very best ones for your viewing pleasure!

The above picture of Dortmund’s yellow wall – the largest standing area in all of European football. A wall of noise. A wall of support. A wall that really represents the Dortmund style of play – constant, never giving up and inspiring.  25,000 fans in one spot cheering and standing the whole game.

It’s really a relentless style of play, moving the ball quickly with quick one and two touch passes and then if they lose the ball they pounce on the opponent with numbers. It requires incredibly skillful players who are in incredible shape. Former Dortmund manager Jurgen Klopp called it heavy metal football. You might go beyond the “heavy metal” description though and call it a Mad Max Fury Road style of play, what with the yellow wall and their fans chanting and singing in unison for the Dortmund team to succeed.

Klopp is famed for his “heavy metal” football, and he coined that phrase when describing the difference between his sides and those of Arsene Wenger.

“He likes having the ball, playing football, passes. It’s like an orchestra. But it’s a silent song. I like heavy metal more. I always want it loud.”

So Dortmund wasn’t playing the calm style of Barcelona or Arsenal, but an amped up version. The passing with a punch in attack and an intimidating defensive pressure. They always want to feel like you’re back on your heels – never comfortable. Dortmund is also known for one of the training tools, that sort of epitomizes their style of play, the footbonaut.

“It is not my sport. I don’t like winning with 80% [possession]. Sorry that is not enough for me. Fighting football, not serenity football, that is what I like.”

It’s the beginning of the season and Borussia Dortmund have proven themselves as a real contender for the Bundesliga title! Their mesmerizing playing style is just thrilling to watch for anyone who loves football. Coach Lucien Favre has managed to unite experienced and young players and has created an infinite attacking spirit. Together with Joe Devine and Alex Stewart from Tifo Football, we take a closer look at the key factors of success for the Black-And-Yellows. Can they maintain their peak form and aim for the Bundesliga title?

Dortmund also have some of the best soccer fans in all of world football. It’s known as the yellow wall at home.

There is nothing quite like Borussia Dortmund’s Yellow Wall. 25,000 fans can pack into this part of the club’s Westfalenstadion and create one of the best atmospheres in the game. In this edition of Heart of Football, Boris from Dusseldorf takes us into the stand and shows us the sights and sounds that only Dortmund can provide.

What Soccer Shoes Does Messi Wear?

Posted by admin - June 26, 2019 0
Lionel Messi is the FIFA player of the year and the engine of the Barcelona side. Messi can dribble, pass… 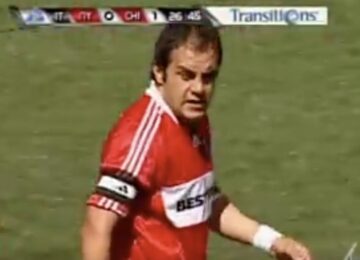 The Ass Pass by Cuauhtémoc Blanco

Posted by admin - June 26, 2019 0
There’s the safe back pass to the keeper to clear the soccer ball. There’s the brilliant and clever back (body…