But with Ronaldo gone, Real Madrid have to come up with a more team oriented style of playing football – where they build out of the back and keep possession more rather than try to break quickly by getting the ball to Ronaldo out wide. It’s a near era for Real Madrid, with Zidane back in charge they may have to build their youth system up or go out and spend money to replace Ronaldo. I’m guessing Zidane will do both.

Real Madrid teamwork, combinations and counter during the 2019 La Liga season. Real Madrid have been playing a beautiful football recently and the football team look fresh and energized.

The foundation of Real Madrid’s style of play for now will be based around stars like Modric, Kroos, Isco, Garth Bale, and Benzema. All of these players will have to step up to replace Ronaldo.

Here’s a great Zidane quote. Must be pretty amazing to play for one of the greatest players to ever play:

“I was lucky to come from a difficult area. It teaches you not just about football but also life. There were lots of kids from different races and poor families. People had to struggle to get through the day.”

Zidane on the opposition:

“I’m not worried about conceding chances against the opposition. What worries us is playing good football, but the opponents are there to put you in difficulty.”

One thing that Real Madrid might have more than other La Liga teams is a toughness and bite. They know how to get stuck in when they need to and almost intimidate other teams with their defense.

Also, the fans of Real Madrid, so used to winning titles, are very demanding, you’ll hear them whistling if their team doesn’t have enough of the ball or are losing to a lesser team.

Posted by admin - June 26, 2019 0
Many have written off Ronaldinho now that he’s back in Brazil playing for Flamengo. However, the once world player of…

Posted by admin - June 25, 2019 0
Adidas: Fast Versus Fast Zizou and Messi return, this time joined by a worthy opponent in David Villa, both players… 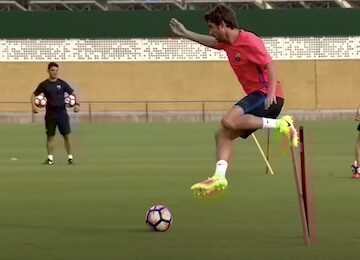 Posted by admin - June 26, 2019 0
Barcelona’s training sessions also include obstacle course like routines. Of course Barcelona always start with some keep away or a…

Posted by admin - June 26, 2019 0
This is from a while back, but it appears that Sergio Ramos‘ penalty kick miss in the Champions League semi-finals…

Posted by admin - June 25, 2019 0
Visit our blog page for new soccer content. Compilation of the best Barça style goals with more than 20 passes.…