Fake injuries in soccer you say. No way. Never happens. There are some Oscar award winning performances in this video below. Daniel Day Lewis would be proud. My favorite fake soccer injury is when the faking player looks over, sort of peeks at the referee to see if he’s going to get the call. Yes, there’s a certain art to the fake injury. A flop or dive takes some skill in soccer! Only an artist can pull it off and get the call they want from the referee. Earn a penalty when you’ve barely been touch, one can’t over do it or they won’t get the call.

One player who does the fake injury performance at a high level is Barcelona’s Sergio Busquets. Here he peeks at the ref as he tries to get Motta a red card. One player who never dives or fakes an injury his Messi.

Sometimes players go down like they’ve been shot by some assassin high up in the stadium that’s picked them out with their long range rifle. The Italians are experts at this, seemingly shot in the back sometimes just when they get near the penalty box.

Should faking or dives be banned more outright in soccer? I don’t know, in some ways it’s part of the game now. Drawing fouls and faking or maybe just exaggerating a kick is so engrained in the game of soccer I don’t know how you really remove it from the game completely.

The term “flopping” is usually only reserved for soccer, when a player attempts to trick the referee into thinking they’ve been fouled. But flopping is starting to take place in other sports too, the drama, the acting, the exaggerating becoming a trend. But the flop originated in soccer long ago.

Watch some of the best fake injuries in soccer below in this compilation.

And here’s an extra one, just because it’s kind of clever: Hearts defender Igor Rossi took an epic dive, but it was for a good cause. Trying to buy time when there was an actual real injury to one of his teammates.

Posted by admin - June 26, 2019 0
With the World Cup on everybody’s mind are we forgetting about a great soccer match set to take place in… 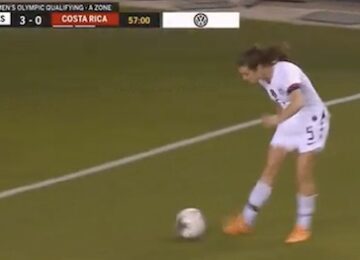 Posted by John Webster - February 5, 2020 0
Yes, even some of the best soccer players in the world make mistakes. Perhaps the best outside defender in the…

Posted by admin - June 26, 2019 0
There’s a certain art to passing the soccer ball. And passing is the core part of the game. Passing the…