Frenkie de Jong of Barcelona loves to do this turn to escape pressure. It’s a bit of a feint like he’s going one way but he  instead spins out the other way. It’s a move that he does quite often and with great effect. The turn is clearly Frenkie de Jong’s favorite skill. This turn is really popular and useful for central midfielders, and many say that Xavi did this turn all the time while he played for Barcelona. The question now, and the pressure on Frenkie, is can he become the next Iniesta or Xavi for Barcelona?

One thing that stands out when Frenkie de Jung does this turn is how he accelerates after he does the move to break free from pressure. That’s the important thing to do with any dribbling move or fake – the change of pace after the skill is executed. Slow then fast. 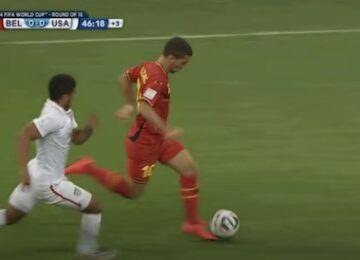 Posted by admin - June 26, 2019 0
During Copa America, which took place in Argentina, a Peruvian fan buys a ticket in the local supporters section for… 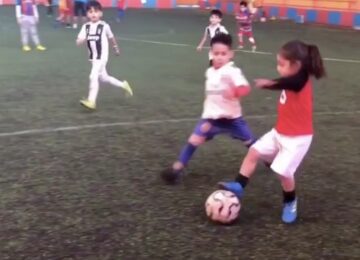 Posted by John Webster - January 18, 2020 0
First the little girl embarrasses a kid wearing a Real Madrid jersey with a perfectly timed pull back. Then she…

Learn How to Play Soccer

Posted by admin - June 26, 2019 0
During every World Cup, every four years, with all the excitement around the game of soccer, there are people new…

Posted by admin - June 26, 2019 0
The first galacico and star of Real Madrid, Barcelona and now Inter Milan, with his wife and model Helen. (Source…