Let’s learn how to play soccer like Carli Lloyd. What stands out about how Carli Lloyd plays soccer is her desire and intensity. She’s none stop. Always moving and going after the game. And when she has the soccer ball at her foot she’s looking to make something happen. She’s buzzing on the pitch. She’s relentless.

If you’re going to name the greatest female soccer player in the world, Carli Lloyd is going to have to be someone who’s in the conversation and near the top of the list. Really, Lloyd is someone who doesn’t get enough attention for just how good she is at scoring and creating goals. She’s underrated. And she keeps getting better.

Will Carli Lloyd Kick Field Goals in the NFL? These days, if you’re searching for Carli Lloyd on Google, everything that comes up is about Lloyd kicking field goals in the NFL. But Lloyd’s soccer career isn’t over just yet. What with Alex Morgan set to have a baby next year, Lloyd will now be the main striker for the U.S. national team in the Olympics. I imagine Lloyd will score a lot of goals for the team since she’ll be the main forward and attacking force. Then when Lloyd retires she might kick some field goals in the NFL.

The unique thing that Lloyd does is attack defenders with the ball. She’s always driving at them. Not enough players do this. Lloyd is always playing like her team is behind and she has to score a goal.

See how Carli Lloyd led the USWNT to a third World Cup victory and her hat-trick in the World Cup final.

Here are some motivational quotes from Carli Lloyd:

Carli Lloyd even has her own soccer skills camp where you can really learn how to play like her.

The goal of this soccer skills clinic is to provide the young players the opportunity to train just like I do and give them an insight into what it takes into becoming a player that is efficient when dribbling; effective foot-skills; a good first touch and accurate passing ability. The agenda for the session will contain juggling, dribbling, foot skills, first touch, passing, mental habits talk, and photos.

Carli Lloyd’s most amazing goal is her half field goal in the World Cup final. Lloyd just doesn’t stop, she always wants more. Even winning 3-0 already Lloyd looked up and saw the keeper out and went for it.

The Art of Controlling the Soccer Ball

Posted by admin - June 26, 2019 0
There’s a certain art to controlling the soccer ball. If you watch the best players in the world, they don’t… 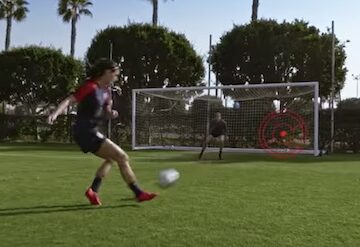 Posted by admin - March 2, 2019 0
Alex Morgan has become the greatest women’s soccer player in the game today. Morgan had a rapid rise to success…

Posted by admin - June 26, 2019 0
Neymar, the young Brazilian who is destined to become a world wide star, flicks the ball up and over the…