Here’s Barcelona’s Andres Iniesta showing you how to keep possession of the ball. This is shielding. This is ball retention. Iniesta can cut and turn and spin away from defenders and always has his body between the ball and the defender.

And young soccer players who think they’re not big enough or strong enough to play soccer at a high level. Here’s Iniesta, a small and skinny player who never loses the ball. It also shows the faith his teammates have in him. They give him the ball when he’s under pressure cause they know he won’t lose it. And Iniesta seeks out the ball when he’s got someone on his back. He always wants the ball. That’s what makes a great player.

Notice how Iniesta sort of invites the pressure and defenders to come close to him and then almost uses him to spin away – like riding a wave. Iniesta can also dribble with both feet, the inside and outside of his feet, to escape pressure. Shielding and dribbling skills of the highest level.

It’s sort of a trick Iniesta is pulling off in these highlight clips. He’s carrying the ball along with the defender on his back, and the defender thinks he’s got Iniesta if not contained then he maybe has a chance to win the ball.

But Iniesta glides along with the ball and isn’t really phased by the pressure or contact from the defenders. Instead Iniesta uses the pressure to open up the other team’s defense. Iniesta partly knows that if he’s inviting pressure then there’s someone else on Barcelona who’s open.

There’s an art to shielding the soccer ball. It takes a certain confidence. Arrogance even. You’re almost inviting a defender to try to take the ball or come in with a tough tackle to win it. But shielding the ball is crucial to being a good soccer player. Shielding is keeping your body between the ball and the defender who’s trying to take it.

What’s key in shielding is having the ball on the foot away from the defender, so that’s why it’s crucial to have the ability to control and dribble the ball with both feet. It’s fine to favor one foot, but at the minimum you need to have good skills with both feet to be a top player. There are world class players who favor one foot, look at Arjen Robben or Messi, but they are exceptional with that favored foot.

Watch Iniesta shield the ball for a second and then turn.

When shielding the ball bend your knees and keep your legs wide enough so you can turn or move the ball away from the defender while protecting it. Get your arms up for balance and so you can feel where the defender is. There’s no need to elbow or push the other player but a little pushing with your shoulder or arms is often required. Don’t have your back turned to the defender but protect the ball from an angle, sort of side on.

And there’s a surprising amount of shielding of the ball in every soccer game, whether it’s to win a free kicks, throw-ins, and or corners. If you start to look for you’ll see just how prevalent it is in a game. Whenever there’s a bit of congestion in a tight area on the field, shielding the ball comes into play.

Shielding enables other teammates to get open. It could just entail dribbling along the sidelines, protecting the ball long enough for a teammate to make that run into the box. That’s shielding. And shielding is something that you will gain confidence in doing the more you do it. Sometimes you don’t have to get rid of the ball right away or should you. Instead, many times you need to hold the ball up so your team can gain ground and move up the field.

Really, shielding is a skill that doesn’t get enough credit. It enables you to draw defenders in and then release the ball to an open player. The best soccer players always want the ball all the time, even when they’re under pressure, because they know that with one little flick or pass they can find a player who can score. The best players know they can protect the ball if they’re in a crowded space, so they ask for the bal even if there’s a defender on their back.

Imagine the confidence it takes to shield the ball in the middle of the field at Old Trafford when Manchester United is playing against Arsenal, with 80,000 fans screaming – you can’t lose the ball then. Or imagine the 90,000 fans at the Camp Nou who are very quiet and still but then start to whistle and grown when a player loses the ball. In those arenas no matter what you do you keep your body in front of the ball and shield it.

In practice, when working on shielding, imagine the importance of keeping the ball in the middle of the field during the World Cup, have defenders push, pull and kick a little bit at you as they try to win the ball. Exaggerate this pushing and mock kicking in training so when it happens in a game you expect it. Soon enough you’ll never leave the ball alone but will always keep it near you and protected.

It’s an interesting thing that soccer is usually all about one and two touch passing, but there are more times than you would think that shielding the ball comes into play. When the play is stopped and one player is fighting off defenders to keep possession. As soccer coaches, while you want your team to play quick one and two touch soccer you also want your players to be confident on the ball and know they can shield the ball when they’re under pressure and nobody is open or near them at that moment to pass to.

Again, shielding the ball, holding it, is a tactic, a skill, that helps your team open up defenses. Since when the other team does double team or rush to win the ball from one player another player can break free. Don’t foul the opposing player, use your shoulder and be strong but don’t get your arms up too high or use your elbows.

Posted by admin - June 26, 2019 0
Portuguese marketing agency Futebol Finance has published a list of the top 50 footballer’s salaries this season and the results…

Posted by admin - June 26, 2019 0
What exactly does the term Talisman meaning in football/soccer? A talisman is something or someone who produces apparently magical or… 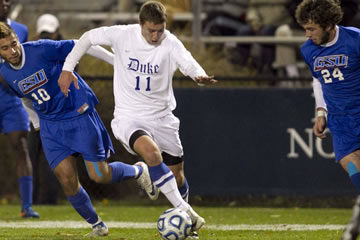 From College Soccer to the Pros: What Schools Produces the Most MLS Players?

Posted by admin - July 10, 2019 0
What are the top colleges as far as those who’ve produced the most professional soccer players, specifically the most MLS…