What a great and fun game to play say after a training session or practice, Soccer NetBall. I hadn’t really heard of net ball before seeing the videos below. But it’s an ideal game to play to work on your accuracy and touch on the ball with a bit of added pressure, since you have to hit the net with the ball and the ball can’t bounce. It gets increasingly harder as you move farther away from the goal.

Also, try using your weaker foot and see how it goes once you get the hang of it with your favored foot. Or try shooting at different angles on the soccer field. It reminds me of playing the cross bar challenge. And you can vary the distance and number of chances you get as you go along.

Netball… The soccer version. Introduced to us by Alex Morgan.

Even though Press doesn’t win she has the best striking technique – driving through the center of the ball but stopping her follow through just as she strikes it. Looks like Morgan doesn’t have the cleanest of strikes in this game.

Round 2, this time Alex Morgan is joined by USWNT teammate Allie Long for a shot at the Soccer Net Ball title.

Posted by admin - June 26, 2019 0
The following individuals submitted content and or helped with the creation or editing of this site: Lawrence Ostlere Tom Sheldrick…

Posted by admin - June 26, 2019 0
Santino Quaranta sounds like a player who could be playing for Honduras rather than the United States, or Mexico, or…

Posted by admin - June 26, 2019 0
See the Raleigh Elite play this summer – before the players go pro. The Elite competes in the South Atlantic… 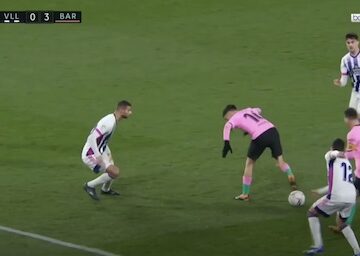 Pedri Back Heel Pass to Messi

Posted by John Webster - December 23, 2020 0
Lionel Messi is enjoying himself again on the football field. Messi has found his new partner at Barcelona. Someone who…