How can someone who scores 50 Champions League goals be underrated? But that’s the case with Benzema. The Real Madrid forward played under the shadow of Cristiano Ronaldo for years, setting up Ronaldo and still scoring goals himself yet not getting nearly as much attention. Karim Benzema is the most underrated forward in all of world football.

And Benzema is happy to take on a more important role at Real Madrid now that Ronaldo has moved on to play in Italy for Juventus. It sounds like he’s going to enjoy the freedom of being more of the star in the Spanish side, backed up by the online bookies who are starting to consider him too to be this League’s top goalscorer with increasing odds in his favor.

“Now I’m the one leading the attack. I used to play for Cristiano and I was trying to find him so that he could score even more goals,” said the Frenchman. “I was under the radar, now it’s up to me to prove that I want to score goals.”

What stands out about the Real Madrid forward is he’s averaged 15 goals every season in the decade he’s played for the team. He would have had more if he was selfish and didn’t set up Cristiano Ronaldo. Perhaps that’s why he gets odds of 500/1 with Betvictor for being top goalscorer of this Champion’s League season, however we expect these odds to rise throughout the season. Plus, Benzema didn’t take penalty kicks or free kicks with Ronaldo in the side. Benzema’s role was to setup Ronaldo and slot home goals in and around the box.

If you’re going to pick a football player for your fantasy football league team or select a forward for your Champions League team you can’t go wrong with the Frenchman. Over in the English Premier League a host of teams, certainly a struggling team like Manchester United, would love to have his services in front of goal. Chelsea. Tottenham Hotspurs. You could bet that many teams would sign him if they could. If you’re a punter and want to get information about the chances of Benzema’s tranfers you ought to check out online betting sites for complete review on the subject. Here’s the complete list of UK betting sites to choose from.

Benzema is a clear number 9 type forward, a soccer / football player who hovers around the goal area ready to pounce on any chances that come his way. If you’re looking to learn how to play forward Benzema is a player to model your game after. He’s clever and crafty at making the right runs in the box to score goals. He’s perfected the timing of his runs and reading the game.

Karim Benzema has reached 50 Champions League goals with Real Madrid! Enjoy ALL of them here!

Reaching the landmark of 50 goals saw him overtake Real’s legendary striker Alfredo di Stefano in Europe, while only the two usual suspects – Ronaldo and Messi – and Robert Lewandowski (59) have scored more than Benzema in the Champions League since 2009.

Posted by admin - June 26, 2019 0
He had a great tournament and this is a great goal.   Watch More Videos Droba Volley Versus Liverpool Carlos…

Posted by admin - June 26, 2019 0
Russell, a stand out midfielder for the San Jose Earthquakes, and won a few titles with them, comes out of…

Posted by admin - June 26, 2019 0
US Soccer Still Searches for Passion By Jeff Kassouf The United States National Team will begin its quest for a…

Soccer Speed Workouts – The Warm up 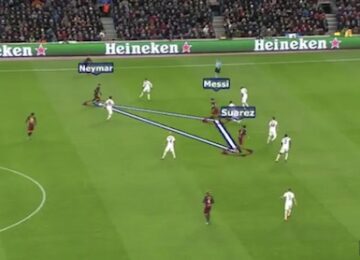 Posted by John Webster - March 5, 2020 0
Is Neymar returning to Barcelona? They really need the Brazilian star. It might cost Barcelona a pretty penny but they…