What five qualities does a good soccer player need to possess? While not everyone is going to become Ibrahimovic, Mbappe, Neymar, Ozil, Hazard, Messi or Ronaldo, if you can master these five soccer skills you’ll be able to play soccer at a very high level.

Touch. A good first touch is the most important quality every soccer player should possess. Have you ever played a pick up soccer game with an older player, an older man maybe with gray hair, who you’d think wouldn’t be able to keep up with the young players? But since this old man has great touch on the ball he never loses it and can play the ball quickly when he’s closed down. To improve your first touch spend time with the ball, juggling, knocking the ball against the wall, and playing in pick up games.

You’ll know you have a good first touch if your friend can strike the ball as hard as they can at your feet and you’re still able to control the ball out in front of you a few feet. And that’s the other key, your first touch should be out of your feet so you can make the next pass or take a shot. If the ball is controlled under your feet the defender will be able to close you down. And this also means you won’t have your head up and see that teammate making the diagonal run. You often see a poor first touch when a forward is on a breakaway with the keeper and doesn’t get the ball out from under them enough to slot the ball past the on rushing keeper.

Most unbelievable controls in world football / soccer. This is what a perfect first touch in soccer looks like. Not only is it controlling the soccer ball but thinking about what you’re going to do next with the ball and how you’re going to beat the defender.

Vision. All soccer players should be able to see the field and know where their teammates are on the pitch. Vision is also about knowing the game, when to keep the ball and when to make that long pass. It doesn’t really make sense to blast the ball down the field if there’s nobody to help or support the player you’re making the pass to. The key to developing good vision is to look around you and check who’s coming to pressure you before you receive the ball.

Xavi was a master of this for Barcelona, always looking over his shoulder to see who was closing him down. This also means opening up your body to see the whole field, which could just be turning your shoulder to face the field. And part of having good vision is finding those pockets of space between defenders to ask for the ball or play the ball. Good vision means moving to the right spaces on the field and constantly scanning the field before you receive the ball so you know where you want to make the next pass.

But the vision to pick out the player with a diagonal ball or a through ball, what’s most often called that killer pass, one that sets up a teammate for a chance to score, is the vision that separates the good soccer players from the great. To see the play and then make the pass requires that you have your head up and know when to play the ball, not too early but not too late either. Barcelona’s Jordi Alba has 8 assists so far this year, because he knows to play the ball at the right time, at the right pace, and into the feet of Messi and Suarez. He’s someone to watch if you want to learn how to make the killer pass and have good vision.

Passing. I’m sure you’ve heard the term hospital ball. That’s where a poor pass is played and puts a teammate in danger of being tackled. Nobody wants to receive a slow pass that causes you to lose the ball and could get you hurt. But it goes beyond that. What good soccer players know how to do is play a crisp and hard pass. The most common and accurate pass is the inside of the foot pass. Every good player should be able to make both long and short crisp passes with the inside of the foot.

It’s also easier to control a pass when it’s played at pace and harder for the defender to intercept. Crisp passes are sent with authority and confidence – it gets everyone on the team moving the ball around quicker. And of course after every crisp pass the player making the pass should move into a better position to support the player who they passed to. Every player on the field should be ready to receive the ball and want the ball, no matter what position they play.

Dribbling. There’s a secret trick to learn how to dribble: with every step you take touch the soccer ball. But the trick to become a great dribbler is to exaggerate this. Try to take as many touches as you can on the ball when you’re walking with it and then jogging with it. Then do the same when you’re sprinting with the ball. The idea is to gain such close control that whenever a defender comes close to you it’s easy to cut one way or the other.

The next thing to do to become an expert dribbler is setup five cones and weave in and out of the cones, first with one foot and then the other and then with all the other different parts of your feet. Start out slow at first and build up speed. But still try to take as many touches as you can while you weave in and out of the cones. Finally, to beat a player on the dribble the key is a change of pace, slow then fast, lull the defender to sleep then blow past them. If you master close control and change of pace you’ll soon be dribbling like Messi. Well, perhaps not that good, but close.

Movement. This means the ability to move without the ball to get open and support your teammates. On the top soccer teams, all the players know how to move and make runs when they don’t have the ball. Sometimes the runs are to drag defenders away so another teammate can fill the space and get the ball. Sometimes it’s a run to support a player who’s under pressure.

This good movement gives a player who’s under pressure a release valve – someone play the ball to for a second so they can get open again and get the ball back. Barcelona players often do this with short passes that seem like nothing. But really they are little outlet passes to teammates so they can get their head up again and move into a space where they can see the field better. Iniesta and Xavi would sometimes play the ball back and forth in a mini game of keep away until that killer pass opened up.

Posted by admin - June 25, 2019 0
BYU Cougars B.Y.U. is committed to providing the best opportunity to improve and showcase the skills of our Student Athletes.… 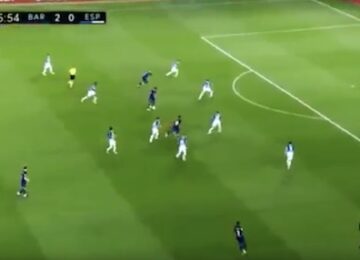 Posted by John Webster - March 5, 2020 0
The clever back heel flick pass by Messi really makes this Barcelona goal all the more special. Once again Barcelona’s…

Posted by admin - June 26, 2019 0
Van Basten’s legendary goal versus the USSR in the European Championship.

Posted by admin - June 26, 2019 0
Is this due to the rising unemployment rate in Spain? As people don’t have jobs so they can come…