Manchester United’s Argentine defender Marcos Rojo introduced mate to Paul Pogba and it seems like the French World Cup winner is now hooked. Pogba is often seen drinking it before big games. I wonder, was it Jose Mourinho leaving or the mate that got Pogba to start playing like himself once again…? Probably a little of both. Pogba is back to his old self these days, both scores goals for United and setting them up. If Lionel Messi and Luis Suarez drink mate though then it can only be a good thing.

Here’s Pogba on the cover of French GQ drinking mate as well. It seems like a trend these days for players from around the world who are drinking herba mate tea, not just the players from South America where the drink originates.

What is mate exactly? Mate is a stimulant more or less, since it full of caffeine made from dried and chopped yerba mate leaves. Hot water is poured over the leaves in a unique looking container you see players from Argentina and Uruguay using. It helps players focus in and getting pumped up more or less for the game. Pogba’s French teammate Antoine Griezmann is also known to drink mate.

Posted by admin - June 26, 2019 0
Clint Dempsey Versus Arsenal One of his early games in the EPL.  He’s not afraid to take players on, and…

Posted by admin - June 26, 2019 0
There are some oscar award winning performances in this video below. Daniel Day Lewis would be proud.

Posted by admin - June 26, 2019 0
Clint Dempsy Volley Versus Bolton Dempsey with a superb volley adds to this record breaking goal tally for the season… 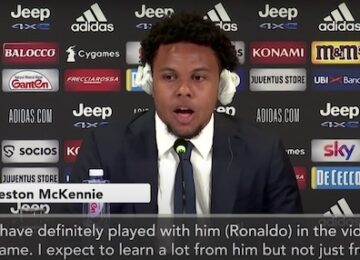 ‘I Played With Ronaldo In A Computer Game!’ – Juventus’ New Signing Weston McKennie

Posted by admin - June 26, 2019 0
The LA Galaxy loses in a penalty shootout to Real Salt Lake. If you missed it, here are the highlights.…