What young soccer players should learn from Pulisic’s latest performance for Chelsea is how to persevere when things are not going right. For Pulisic, he had a tough couple weeks, not playing much or at all and sometimes not even suiting up for games. And then he flew all the way back to the United States and lost to Canada and was subbed out and his picture was on the front page of ESPN, nearly in tears. This is what Pulisic said about a month ago before scoring his hat-trick:

“The city is great, I’ve enjoyed it. It has been good but it has been a change. There are going to be challenges,” Pulisic said. “I knew it was going to be tough coming here. It is never going to be easy. I’ve got to grind it out. I want to be back and be a part of the team and help the team win games.

Fast forward a few more weeks and Pulisic is getting a bit of playing time and making the most of it. Full of energy. Head up. Getting a few assists here and there and always working hard. And then he gets to start his first game in quite a while and scores a hat trick. Yes, even the best soccer / football players have rough patches or times when they’re not playing. So young soccer players, if you’re not playing as much as you think you should on your club team, keep working hard. Don’t complain. Don’t whine. Keep training. Keep fighting and make use of the time you get on the soccer field.

But it’s good to maintain a balance, you don’t want to put too much pressure on yourself thinking that you have to do too much when you do get your chance. Play your game. Work hard but don’t feel like this is your last opportunity and play outside yourself. I think that’s what stands out about Pulisic, he stayed professional and played his game and his style. If you choose to take too big of bite when you get your chance you might choke a bit. Instead, build up your confidence with small wins on the soccer field. An assist here. Setting up chances. Winning the ball on defense. And that way you can build up your confidence.

Christian Pulisic broke his Chelsea duck in style on Saturday, scoring a hat trick with three well-taken goals against Burnley. One thing that Pulisic doesn’t that defenders hate is he charges at them on the dribble. Not enough players do this. More should. Take the ball and go at them, get defenders on their heels. Make them think.

“I know what a good player he is, I see that close at hand, Lampard said. “There are things he has to learn and improve because he’s just turned 21, it’s the same with all young players. There are things that he’s going to work on and I think he knows it and he knows that I’m driving that daily in training. The way he’s trained in the past few weeks, and the impact he’s had when playing, he’s said to everyone ‘here I am’ and what talent he does have. I’m really pleased for him today. It’s what we need from all our attacking players; to be a threat, to play like that, have a ruthless edge about how they finish and he showed the full package today.”

Posted by admin - June 26, 2019 0
Messi does his Maradona imitation against Getafe. Scores a goal just much like Diego’s goal versus England. Watch it here… Diego is…

Posted by admin - June 26, 2019 0
The Newcastle owner Mike Ashley enjoying a beverage while taking in his team’s game. This could be one of the…

Posted by admin - June 26, 2019 0
If you want to increase your speed and strength and prevent injuries, then plyometrics are the ideal place to start… 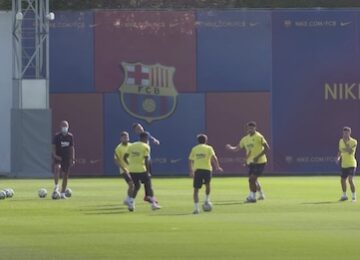 Posted by admin - June 26, 2019 0
Soccer drill practice ideas: Here are five good soccer drills that you can run through at almost every soccer training…

Posted by admin - June 26, 2019 0
Pique, the back heel specialist? Lionel Messi got the final touch, but it was an incredible back heel assist from…