Of course Messi is smooth and Zidane and Ronaldinho but there are players like Littman and Berbatov who are exceptionally smooth but not as well known. Is Cristiano Ronaldo smooth? Ronaldo is one of the best to ever play the game, yet is he smooth….

What about Maradona, of course he’s smooth…almost in another category. So we’ll say this list is a work in progress. Maybe we’ll remove the more well known greats of the game, as in players like Messi and Maradona, and keep the understated lesser known football players.

The smoothest players play like they need to be woken up. Like it’s a Sunday league pickup game. Like you think they don’t care until they’ve scored three goals on you.

I think the Berbatov picture above, him blowing a bubble says it all. He’s almost so bored with everything. He needs to be chewing gum and blowing bubbles while he plays soccer to alleviate the tediousness of the game or more so the players he’s playing against. In truth though, all these smooth players appear to be indifferent at times when they’re playing when underneath is a passion and competitiveness and desire to win that’s above most other players and is what makes them so great.

This smoothest soccer players of all-time list was hard to put together. I mean where do I put the Barcelona midfielders, Iniesta and Xavi and Busquets, do they all make it? What about Robinho or other Brazilian greats like Neymar….? 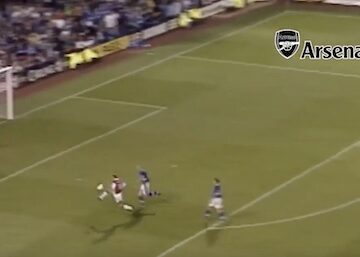 Posted by admin - June 26, 2019 0
This is the Bergkamp goal that will always be talked about and searched for online. Everything about this Dennis Bergkamp…

Brand Beckham Will Be Missed

Posted by admin - June 25, 2019 0
Brand Beckham Will Be Missed By Tom Sheldrick David Beckham is going to miss out on South Africa. But,…