How different is the soccer ball from fifty years ago? How has the soccer ball evolved over the years? The soccer ball has come a long way and is only getting better with advancements in technology. No longer do quality soccer balls have to be hand stitched or use real leather that soaks up water and becomes heavy. Instead, automatic stitching machines, thermally bonded methods and synthetic leather are used to create top level professional soccer balls.

But today, companies like Nike, Adidas and Puma have mastered the art of making a rounder soccer ball that gives you the best of both worlds. They are created soccer balls that fly through the air properly and don’t have any irregularities or bumps in the stitching since they use less panels. These new balls also give you the grip and touch you need, with the larger surface area.

Since the 1970s, most soccer balls had 32 panels, with 20 hexagonal panels and 12 pentagonal panels stitched together. These panels were then hand stitched with a polyester thread. These hand sown balls lasted longer since they had a tighter stitch, but the stitching could make the corners uneven. Machine stitched and thermally bonded balls give you a ball that’s free from any bumps that can throw off how a ball bounces or moves when you strike it.

Nowadays, top quality soccer balls have panels thermally molded together, like with the Adidas made Jabulani Telstar soccer ball. These balls have less panels and are actually more round than previous balls. Thermally bonded balls have a seamless surface area, no mutations that might make the ball bounce in a odd way. Plus, these balls are virtually waterproof, there’s minimal water uptake in the ball that would weigh it down.

However, again, with less panels on the ball, the ball is less stable and can move in the air in an extreme fashion. But manufactures added in grooves or deeper seems, to stabilize the ball and limit its unpredictable trajectory when it’s struck with power. Really though, the only people who were complaining were the goalkeepers!

A rounder ball, more like a sphere and less oblong, does give you a more consistent performance when striking it and on the bounce, but there was concern about when the ball was hit with power.

The Adidas Teamgeist ball went to 14 panels in the 2006 World Cup, which made the surface area of the ball smooth, but in the air the ball moved wildly at times. The unpredictable flight of the ball reached its peak with the Jabulani ball in the 2010 World Cup, as it went to just 8 panels covering the ball. Adidas then went to six panels with the Brazuca ball in 2014, but added in deeper and longer seams, which improved the aerodynamic flight of the ball. There was less wobbling or knuckling of the ball in the air when it was struck at a high speed. The latest ball for the 2018 World Cup, the Telstar by Adidas, is an homage to the 1970 black and white ball, but with a modern pixelated look. It has six panels as well, but they’ve used longer panel edges and grooves to make the ball stable in the air.

Most high quality soccer balls are made of synthetic leather – real leather would absorb water and make the ball heavy. Polyurethane balls also have a bit more give and aren’t as hard as a PVC (poly vinyl carbonate) ball. Synthetic leather balls are softer and give you a better feel on the ball. As is the case for the Telstar 2018 World Cup ball, a six paneled ball made of premium PU (polyurethane). Most soccer balls are also coated with a finish or sealant to reduce water intake or scuffing.

The bladder of the ball, what you pump up to give it air, are made of either latex or butyl. High quality soccer balls use latex, which is lighter and softer. While butyl balls retain air better they are not as responsive to your touch on the ball.

The Nike Ordem soccer ball, which has 12 panels, along with Nike’s Aerowtrac grooves for accurate flight and stability, is another high quality soccer ball. It’s made of 40% synthetic leather/30% rubber/20% polyester/10% cotton – usually there’s some cloth behind the panels to keep it responsive to touch and feel. The PUMA FINAL 1 Statement ball uses larger panels that reduce the number of seams, so you have more surface area to get a good touch on the ball.

Really, it’s a good idea to have a few soccer balls around the house, a soft or deflated ball to use inside and not break any windows, a cheaper ball to smash against a brick wall or a backstop, and a high quality soccer ball only for use on grass. It’s also good to have different sized balls around too, like a smaller sized ball to work on juggling skills or dibbling. 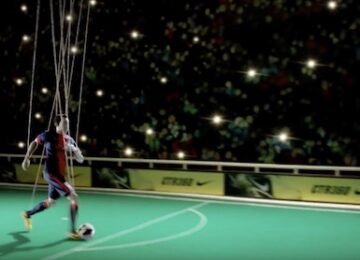 Posted by admin - June 26, 2019 0
Does the paint stay on when they’re playing? This might have been Austria’s best chance at beating Germany. Groups of… 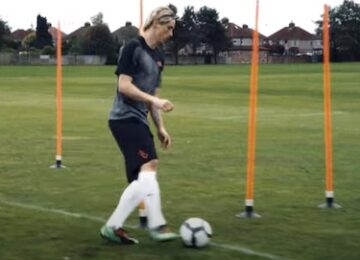 Posted by admin - June 26, 2019 0
Fernando Torres. Check out El Nino’s high-speed move and perfect shot. When Torres played at Liverpool is was perhaps one…

Posted by admin - June 26, 2019 0
The AC Milan maestro takes the UEFA Star Challenge.  How many times he can hit the cross bar out of…

Posted by admin - June 26, 2019 0
Just an awesome picture of the United States national team after beating Honduras 3-2 and clinching a place in the…