There are those times when a defender gets beat so bad that their soul just leaves their body. That was the case for Manchester United’s Harry Maguire when Junior Stanislas put the ball through his legs and smashed the ball at the near post to score.

Maguire rushes at Stanislas, closing him down without taking into consideration that he could get beat on the dribble, or worse, nutmegged. Watch as Maguire’s soul just leaves his body after Stanislas puts the ball through his legs. For Maguire, I’m sure he’s glad he’s playing in an empty stadium when this nutmeg took place.

Junior Stanislas nutmegs Harry Maguire and squeezes his point-blank shot past David De Gea at his near post to give Bournemouth a shock lead at Old Trafford.

Posted by admin - June 26, 2019 0
While the Atletico Madrid goalkeeper is at the near post lining up the wall, Barcelona’s little genius, Lionel Messi, whips…

Pass and Dribble at Speed 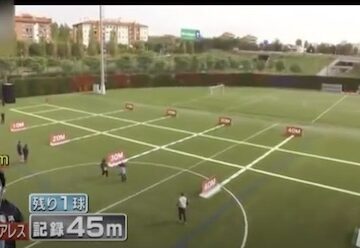 Posted by John Webster - August 2, 2020 0
On what I think is a Japanese television show of some kind, Barcelona’s Messi and Suarez see just how far…