During this difficult time, while we all stay inside, why not watch one of the greatest soccer teams to ever play? This is the day Lionel Messi absolutely annihilated or toyed with Manchester United, and in London no less. Barcelona came to England for the Champions League final and really embarrassed Manchester United.

The Champions League and English Premier League will return, perhaps not until next year, but until then why not enjoy this incredible performance online. Don’t forget about bet-bonuscode.co.uk either, where can get advice from experts.

Widely considered one of the greatest team performances of all-time join us as we watch again the 2011 Champions League final. With Pep Guardiola and Leo Messi both at the peak of their powers, Barcelona put on a true masterclass against Manchester United at Wembley.

From GiveMeSport, Rio Ferdinand talks about trying to stop Lionel Messi. Actually, he says they couldn’t stop him!

During his Wembley performance in 2011, Ferdinand reveals that “he doesn’t even come near you” and that he and Vidic just stood on the halfway line, looked at each other and shook their heads at the brilliance going on.

He goes on to mention that when he did get near Messi, his small stature meant that when he tried to be physical, he simply slipped underneath him.

And Ferdinand went on to talk about how he disagreed with the tactics for the game set out by manager Alex Ferguson. Barcelona had the best midfield in the world at that time and they could stop them.  Xavi, Iniesta and Busquets controlled the entire game.

“The plan was to really to go and meet them high,” Ferdinand told BT Sport.

“Meet them, press them high and try and win the ball early and then obviously go for the jugular.

“We done that, to be fair, with the goal we scored, but in the main we didn’t have the ball in the midfield area.

“This area is key in big games, you need to dominate that area and then you’ve got a good chance of winning it. And they outnumbered us.”

Alex Ferguson said this about the 2011 Barcelona team.

“Barcelona were the best team ever to line up against my Manchester United sides,” he said. “The accomplishments of Messi, Xavi and Iniesta were amazing to me.” 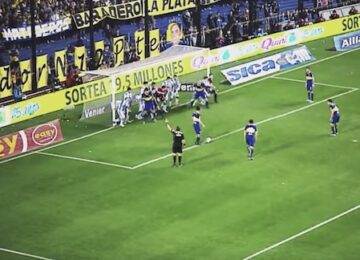 Posted by John Webster - March 25, 2020 0
Let’s look how to score from short range free kicks, you know, when the free kick is really close to…

Posted by admin - June 25, 2019 0
Update: Awana might receive punishment for penalty kick – “We could send him away from the team. We could make…

Posted by admin - June 26, 2019 0
I just watched the soccer documentary Pelada and have to say this is a very good soccer movie. Pelada is…