The clever back heel flick pass by Messi really makes this Barcelona goal all the more special. Once again Barcelona’s Tiki Taka style of passing and possession almost puts the opposing team to sleep and then they pounce on you with a decisive attack. After 27 passes Barcelona score against Espanyol to make it 3-0.

Now and again they counter attack opposing teams and score in just a few passes but more often than not Barcelona keep possession, make the other team nearly hypnotized by the soccer ball, moving in and out and side to side, and then they break through with one killer pass or give and go, often with Messi or Suarez on the end of it. 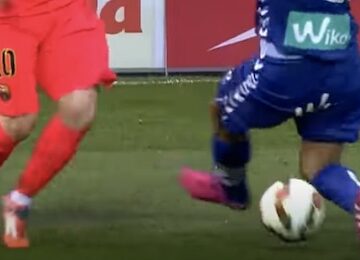 Posted by admin - June 25, 2019 0
Add Eibar to the list of football clubs that Lionel Messi has destroyed. So here’s the amazing Messi dribbling run…

Posted by admin - June 26, 2019 0
Rooney & Cristiano Interview After Winning Club World Cup Title Only in Japan. An attempt at an interview after Manchester…