Really, what’s the most passes in a row which then leads to a goal in all of pro soccer? Here, Barcelona make 40 passes in a row in an El Clasico match versus Real Madrid and then score. Certainly there are times when teams string a ton of passes together but it doesn’t lead to a goal right away. Manchester City made 52 passes and then scored. That’s probably the tops or the record. Man City put together 44 passes another time too.

Real Madrid falling into Barcelona’s “Pinball Machine” at home as every single Barca player touches the soccer ball before Suarez scores. This is Barca. Welcome to Tiki Taka show at Bernabeu, starting with Ronaldo’s “assist” to Bravo. Poor Cristiano is understandably terribly frustrated after Barcelona score.

Posted by admin - June 26, 2019 0
The Corpus – a brand new training device for young players. I don’t know about this new soccer training ball,… 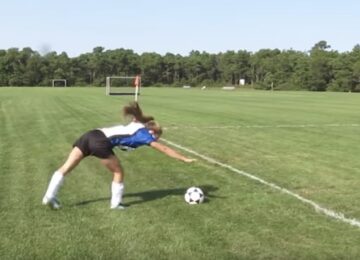 How to Do a Flip Throw-In

Posted by admin - June 26, 2019 0
Can you think back to a soccer game when you were totally in the zone? – Everything came effortlessly and…