The German pro soccer league Bundesliga is aiming for a May return, but soccer fans won’t be in attendance as all large-scale public events in Germany are banned through August 31 because of the COVID-19 pandemic. A team fan however, introduced an idea to both add a live atmosphere to games and help his local economy: cardboard cutouts.

Yes, you can attend the game as a cardboard cutout of yourself, your face, sitting in the stands watching the game. Will they also allow you to give audio of your voice screaming or cheering or booing the opposing team?

The Bundesliga announced that the home stands are filling up nicely with these cardboard cutouts! Over 4,500 cut-outs are now in place and 12,000 ordered. The Bundesliga website is now live in English too to give our international fans a chance to order their cut-out for about $20! I wonder how many fans will do this from around the world? Can I buy multiple cardboard cutouts of myself covering an entire section of the stadium….? Would be a bit frightening to see though.

Unable to lend their vociferous support in the usual way, Gladbach fans have contributed to the ‘Stay at home. Be in the stands’ campaign in droves. For €19.00, the ‘cardboard you’ will be installed in the stands, with the proceeds going to local charities. The Foals have even allowed for fans of other teams to order a cut-out which will be placed in the away end.

“The campaign organizers are regularly overrun with orders; we can hardly keep up trying to install them all,” explained Gladbach fan representative Thomas Weinmann. “But we’re obviously delighted with the overwhelming support it’s received.”

I’m sure Cristiano wouldn’t be upset if he looked up and saw ten thousand Cristiano Ronaldo faces, actually, his face, staring back down at him, rooting for him, cheering him on. It would be a good prank though for opposing fans though. To maybe mock Cristiano with thousands of his faces looking down on him… 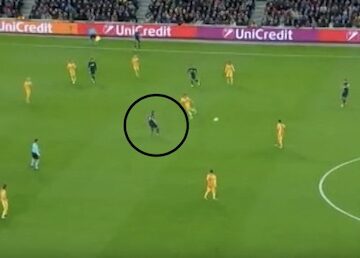 The Half Turn in Soccer

Posted by John Webster - September 4, 2018 0
If you’re playing as a midfielder, turn your body at an angle when you check back to the soccer ball…

Posted by admin - June 26, 2019 0
Altitore joins Villarreal and will step inside the Yellow Submarine – contract terms not agreed upon just yet but transfer…

Posted by admin - June 26, 2019 0
Mancini, the new Manchester City manager, was a legandary player at Samdoria and actually played for a brief period of…