Lionel Messi is the greatest soccer player to ever play the game. I think that’s clear. So it’s probably impossible to really stop him, but can you slow him down, prevent him from scoring so many goals.

I think defenders have tried and failed at this though, Messi is just too quick. If a defender forces him right he’ll just pass the ball off, play a give and go, and get the ball back on his left. Or, Messi might simply put the ball through your legs as he can transfer the ball to his other foot.

What’s also true is many greats in the game of soccer favor one foot, and that foot is so good they don’t even need to use the other foot as much. Think Arjen Robben cutting inside with his left foot.

Even in training with Barcelona Messi can’t be forced to use his right foot. Here, Messi calmly slots the soccer ball into the upper corner with his left. You’d think that his Barcelona teammates would have the solution to stopping Messi or slowing him down or forcing him to score with his right, the weaker foot.

How good is Messi’s right foot though? It’s not like he can’t even use his right foot to score goals. Many players would love to have Messi’s skills with his right foot – the touch and control and placement. It’s just that Messi’s left foot is where all the goals come from.

How many goals has Lionel Messi scored with his right foot in his soccer / football career? Here are the numbers from Sport:

Collectively, could a soccer team work together in an organized fashion to steer Messi towards the right, to his weaker foot? In and around the box, maybe, but the game is so fluid, and Barcelona pass the ball, move the ball around, so well it’s hard to maintain a strategy against one player – there’s too much space. And, again, Messi is too quick.

You can’t say Messi is one footed, but he certainly favors his sensational left foot and that left foot is so good it may not matter what defenders do. After all, Messi scored over 80% of his goals with that left foot. 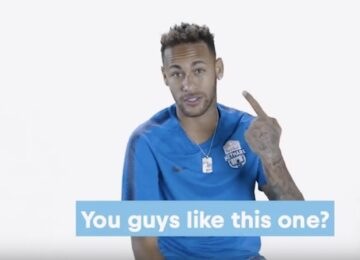 Posted by admin - June 26, 2019 0
Neymar has had quite a few different haircuts. I thought it was usually the other way around, the younger player…

Posted by admin - June 26, 2019 0
A series of great goals from the Welsh wizard, Ryan Giggs. The Manchester United winger Ryan Giggs has been a…

What Soccer Shoes Does Gerrard Wear?

Posted by admin - June 26, 2019 0
The Liverpool captain favors the Adidas Predator boots, and this is what he had this to say about the shoes…