His tongue’s not out but Cristiano Ronaldo does a very good Air Jordan impression with this header. Maybe it’s all the fresh pasta he’s been eating in Italy that’s given his older legs a new life. The 34 year old Juventus star scores once again by nearly floating in the air with this header. Really, Ronaldo just loves to score goals and will do whatever it takes to reach the soccer ball first. Ronaldo has a world of skills and talent but it’s perhaps his desire that separates from all the others except Messi. Although can Messi jump this high…? What’s Cristiano Ronaldo’s vertical leap…?

This is one wonderful cross as well by the Juventus left back Alex Sandro. Bending the ball in perfectly for Ronaldo to rise up and head home.

Here’s another video of the Ronaldo header:

“Ronaldo did something that you see in the NBA; he was up in the air for an hour and a half,” Sampdoria manger Claudio Ranieri, said, according to The Guardian. “There’s nothing you can say about it, you can only congratulate him and move on.”

Ronaldo as per The Guardian: “It was a good goal and I am glad to help the team with another three points. I had problems with my knee for a month but that has gone now and I feel good physically.”

Posted by admin - June 26, 2019 0
What are Roger Spry drills exactly? Roger Spry is a UEFA staff coach educator and sports consultant who has extensive…

Posted by admin - June 25, 2019 0
Brutal Knee to the Head in Utah Girls High School Soccer Game There’s no place in the game of soccer…

Posted by admin - June 25, 2019 0
The Dani Alves Free Kick In the past I’ve railed against Alves for his inability to hit the target when… 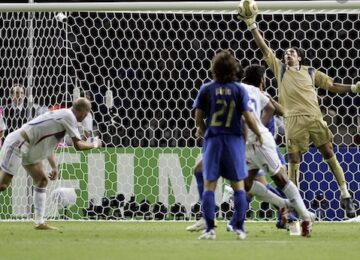 Posted by admin - June 25, 2019 0
Buffon save on the Zidane header! The greatest Italian goalkeeper to ever play secures the World Cup title for Italy…

Posted by admin - June 26, 2019 0
Getty Images By Nicholas Spiller Thomas Vermaelen AKA, “The Verminator”, is a menace to strikers throughout the English Premier League.…