That time Neymar had the defender begging. I don’t know, can you blame this defender for not wanting to get embarrassed. It was Kaka who wore that I’m for Jesus t-shirt, right? And Neymar wore a headband with Jesus on it, right? But back when Neymar played in Brazil, it was often a defender who would get down on his knees and worship him like Jesus. Well, this defender is down on his knees begging Neymar not to make him look like a fool. Praying and on his knees during a live game.

Neymar does not oblige though and proceeds to do a dizzying array of Neymar like skillful moves and go past him on the dribble. The best part is Neymar just telling him to chill out before he beats him.

What stands out here too is how Neymar is wearing his socks low. This is before Neymar’s days of pulling up his socks over his knees.

Neymar shows no mercy though when he has the ball at his feet. It’s no wonder Barcelona is trying to bring him back to the club.

Posted by admin - June 26, 2019 0
When did the tights wearing start happening in soccer? Why do soccer players wear tights even if it’s not… 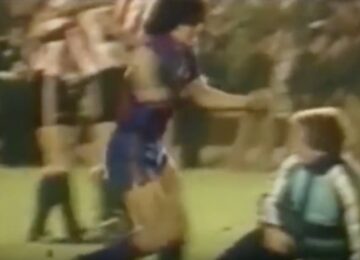 Posted by John Webster - March 1, 2020 0
Just an insane brawl during a match between Barcelona and Athletic Bilbao in 1984. One things clear however: Maradona was…

Posted by admin - June 26, 2019 0
Here are some excellent soccer drills every individual and team can work on to become better on the soccer field.…

Posted by admin - June 26, 2019 0
Tevez beats two players with his skill and strength, and bends the ball into the back of the net.  …