This what they call a horror tackle by Real Salt Lakes’s Everton Luiz on Gustav Svensson. Luiz is nearly leaping into the tackle with his studs up and then appears to try to get in the face of Svensson as he lies on the ground. I’m guessing Luiz will serve a long ban for this next year and receive a fine of some sort. Luckily it appears that Svensson didn’t break his leg or suffer a serious injury. Makes me think of the brutal tackle on another Sounder some years ago, Mullan’s tackle on Steve Zakuani.

Honestly, I can’t believe there are still RSL fans in my mentions trying to defend this horrific tackle from Everton Luiz last night. Good player, but serious head loss in this moment and the scrum after. pic.twitter.com/4D7cdxis4J

And Everton was rightly directed towards the tunnel as he walked off the field.

Get out of here. pic.twitter.com/gnY70xORdA

What Soccer Shoes Does Raul Wear?

Posted by admin - June 26, 2019 0
It has been said that Raul has played his last game for Real Madrid. The legendary forward is a pure…

Posted by admin - June 25, 2019 0
Jozy Altidore Debuts for Villarreal The kids has got guts and looked eager to earn a place on the Villarreal… 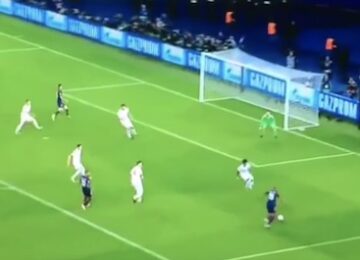 Posted by admin - June 26, 2019 0
From Nike Brazil, the video is in Portuguese, but I think you can get the idea of what they’re trying…