What stands out about Rose Lavelle’s soccer game is how she takes players on. Lavelle goes right at them. It’s a soccer skill that’s not seen enough in the game, both men’s and women’s, so when a soccer player does it, you’re happy to see it. More soccer players should take players on, go at them on the dribble. Defenders hate it. If you want to play like Rose Lavelle that’s the first thing you have to do, take players on. Beat them on the dribble. And Rose Lavelle did it in the World Cup on numerous occasions.

A beautiful solo effort by Lavelle doubles the USWNT’s lead versus the Netherlands in the final of the 2019 FIFA Women’s World Cup. Watch how Lavelle touches the ball with every step as she dribbles at the defender. She even rolls her foot over the ball on the dribble. Lavelle has done this a thousand times – she’s perfected this ability to charge at defenders.

The Journey is an original U.S. Soccer series that follows U.S. Women’s National Team players on and off the field as they work toward earning a spot at the 2019 FIFA Women’s World Cup in France. In this episode of The Journey, we learn just how important her support system in the city of Cincinnati has been for the development of U.S. WNT midfielder Rose Lavelle as a soccer player and as a person. At just 24 years old, Lavelle is the future of the U.S. women’s national team.

“Can I do that?” – with Rose Lavelle. Who played her college soccer at Wisconsin.

What’s interesting about Rose Lavelle is the soccer shoes she’s wearing – New Balance. You don’t see many players wearing that brand. New Balance was very smart to sign her up, and her popularity is only growing after her World Cup success.

“I am so excited to be joining New Balance as the first female soccer player for Team NB,” Lavelle said. “It’s especially meaningful that I’m now playing for a Boston team and wearing boots made by a Boston-based brand. I’m really looking forward to working with New Balance to help grow the brand and the game of soccer both domestically and internationally.”

Posted by admin - June 26, 2019 0
The RI Stingrays are part of the United Soccer League. Participating in the Premier Development League (PDL), the Stingrays play…

Posted by admin - June 25, 2019 0
Beckham Free Kick Versus Montreal David Beckham scores on a signature free kick to tie the match as the LA… 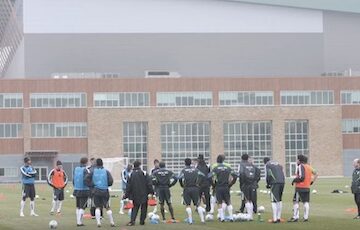 Your Soccer Players, Getting Older and Getting Worse?

Posted by admin - June 26, 2019 0
Even professional soccer players like the Seattle Sounders Brad Evans adjusted his game as he got older, playing different positions…

Posted by admin - June 26, 2019 0
In soccer, ideally you want to try to get to the soccer ball before it bounces and control it out…