We are going over how to read the game like Ngolo Kante in this video covering how he is able to seemingly be everywhere at once and make the plays that he ends up making! If you want to build your soccer team around one player then find some like Kante, although that is hard to do! Kante is one of those midfielders who does all the hard work and running so other players can score goals.

As one commenter said: Two-thirds of the Earth’s surface is covered with water. The other third is covered by N’Golo Kanté. On average, Kante runs over seven miles per game. But Kante is also very smart and positions himself to win balls and stop attacks before they start.

And Kante is a big reason why France went to the finals in Euro 2016 and finally the reason why France won the World Cup in 2018. That’s quite a track record for a player in a short amount of time. While he’s not as well known as say Pogba, he’s the engine that runs the team. 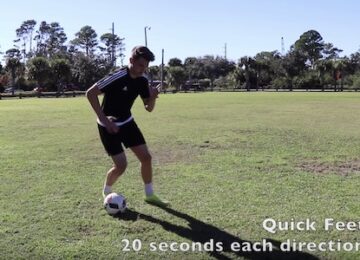 Posted by admin - June 26, 2019 0
Here’s a good soccer training program to follow that will keep you fit during the soccer season and help prevent…

Posted by admin - June 26, 2019 0
Cristiano Ronaldo used to do too many step over moves, and took some punishment for this when showing off too…

Posted by admin - June 26, 2019 0
Compilation of highlights of the former Celtic and Barcelona player. Manchester United just picked him up and are hoping he can…

Posted by admin - June 26, 2019 0
The Trivela is when a soccer player uses the outside of the foot to shoot, pass or cross the…