Alphonso Davies has come a long way in a short time. Born at a refugee camp to parents fleeing civil war in Liberia, he walked onto the pitch in Vancouver 15 years later as the second youngest MLS player ever. This 16-year-old phenom lives with a host family and still rides the subway to school, while starring for the Vancouver Whitecaps and the Canadian National Team.

Of course now Alphonso Davies is playing for Bayern Munich and quickly becoming one of the best outside backs in the world. Davies went playing forward in the MLS to playing defense but his speed in particular has enabled him to make a huge impact for his new German club. What stands out about Davies though is he unselfish and understands the game, knows how to play simple soccer and is quickly becoming beloved at Bayern Munich. 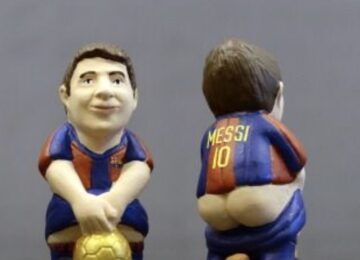 The Greatest Christmas Gift Ever: Lionel Messi on the Pot

Posted by admin - June 26, 2019 0
What’s a good Christmas gift for the soccer fan in your life? Why not a figurine of the greatest soccer…

What Soccer Shoes Does Iniesta Wear?

Posted by admin - June 26, 2019 0
Andres Iniesta is perhaps the best midfielder in the world, along with his teammate Xavi, as he is creative conductor…

Posted by admin - April 2, 2018 0
Learn five unbelievable soccer moves to beat any defender. The game of football (soccer) has been full of magical moments…