Penalty kicks, how soccer players approach taking penalty kicks and what style of kicking the ball they use: For the purpose of this study penalty kicks has been broken down into three categories. The first is the “push” shot. This shot is played with the inside of the foot by opening up the hips. It tends to be accurate but not powerful. The second is the “driven” shot. The player strikes the ball with the laces of the boot.

It is a powerful shot but often the shooter has little idea where the ball will go. The third is the cut shot. This is a combination of the first two. The soccer ball is struck with the instep or on the side of the big toe. When executed properly it can be both accurate and powerful.

How do the pros shoot penalty kicks in soccer?

There are of course other ways to strike the ball when taking a penalty kick or variations of kicks – players have clever ways of making adjustments when they step up to the spot. And players all run up to the soccer ball from different distances, some close some far some taking multiple steps some a few. The key to taking a good penalty kick is to step up with confidence and know what you want to do before you strike the ball! How do the pros shoot penalty kicks in soccer:

The cut shot was by far the most popular. 27 of the 46 kicks (59%) used this technique with an incredible 89% success rate. The push shot was used 14 times with a success rate of 71%. The least popular and least successful was the driven shot. Out of 5 attempts only 3 goals were scored. However, none were saved. Both misses (Mijatovic & DiBiagio) both hit the crossbar.

Perhaps more significant is an examination of the “cut” shot. Twenty-one right-footed players used this technique resulting in 20 shots going to the goalkeeper’s right-hand side (95%). The only exception was Brazil’s Emerson who sent the ball up the middle. Five of 6 left footed players shot to the goalkeepers left hand side.

In the image below Mario Balotelli steps up for Manchester City to take a pk. 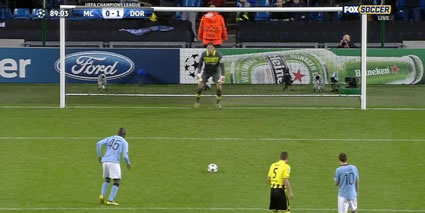 How the Goalkeepers Reacted

Most goalkeepers seemed to wait until the striker was almost about to shoot before going in a certain direction. Goalkeepers dove to the correct side on 29 of 46 penalties (63%). In fact Seaman (Eng) and Roa (Arg) went the right way on all 12 penalties in their game. Seaman was wrong footed on Ayalla’s kick but recovered and was unlucky not to save. It appears that goalkeepers have learned some lessons in recent years.

There has been a trend amongst shooters to wait and see which way the keeper is going before taking a shot. In the 80’s and early 90’s many goalkeepers were already half way across the goal before the shot was taken (remember Jorge Campos against Bulgaria in 1994). As a result shooters adapted their style by delaying their kick and waiting to see what the goalkeeper is doing. In France I believe we came full circle.

Goalkeepers waited until the last possible second to dive “early”. Ric Miller documented in a previous article (July/August 1996) that 18 of 44 penalties (41%) at the 1994 World Cup were placed in the area 6 feet either side of the goalkeeper. The likelihood of a save in this area is good. However, in 1998 only 5 of 46 penalties (11%) were shot in that area.

Deja Vu at the Penalty Spot

Gabriel Batistuta, Alan Shearer and Roberto Baggio all took two penalties at the 1998 World Cup. Batistuta scored in regulation against both Jamaica and England. He shot once to the left and once to the right. He was substituted before the shootout against England. Alan Shearer took two penalties in that game one in regulation and one in the shootout. He scored twice with almost identical shots. Roberto Baggio missed the last shot for Italy in the 1994 shootout.

With 5 minutes remaining in Italy’s opening game of 1998 he stepped up to score the equalizer against Chile and exorcise the demons of 1994. He was called upon again in the second round shootout against France but this time shot first instead of last. He changed directions and sent Barthez the wrong way.

Two other participants from the 1994 Final shootout also revisited the penalty spot in 1998. Dunga (Brazil) scored again while Albertini (Italy) missed against France. Suker (Croatia) was asked to retake his penalty against Romania because of an infringement in the box. After checking his pulse he duplicated his first kick to score the only goal of the game. The Romanians are almost as unfortunate as the Italians. In the two previous World Cups they went home after losing shoot outs to Ireland and Sweden in 1990 and 1994 respectively.

The following is a listing of every penalty kick taken in the 1998 World Cup.